The floor was spotless a minute ago, but now a yellow spatter blooms in the stone.  They look like yellow carnations, trampled in the mud.

They do not move--each stain is stationary--but the whole pattern moves, like paint spots dripping from an invisible brush, slowly spreading away from the closed door they seem to have crept under.

They pause for a second, after entering the room, thickening as they darken.  And then then the stains head straight for the two thieves.  They appear like footprints.

From all around them, they can hear the stone groaning in its sickness.

More yellow spots gather, like clouds on the horizon.  They creep up the walls and dapple themselves across the lintel.  The stains are reaching, like the arm of a leper.

Finally, one of the thieves can bear it no longer.  He throws his pack on the ground and sprints across the stain.  He will kick open the door and sprint out, where the sunlight will warm his pale face.

His first three steps cross the yellow stain without incident, but on the fourth, his foot passes through the floor as if it wasn't there.  There is the sound of snapping bone and then the thief is prone.  His leg missing beneath the knee.

There is a moment of cross-section, where the entire meat of the calf is visible, before it is obscured by the profusion of blood.

A second snap, and then his arm is vanished.  Another snap, and another.

Soon there is nothing left of the man except crimson pools.  There is a small sound, like many cats drinking milk at once, and then the blood is gone as well.

The stain has fattened itself, and now the spots are thicker, darker, and more complex.  There is no longer any clear stone between the individual stains, which cover the floor like the roiling of slow smoke.

The second thief watches the murky roses of the stain creep closer.  There is some larger pattern to it.  Here he can see where a certain thickening hints at a low-slung jaw.  On the far wall, there are implications of an enormous eye.

The thief backs into the final corner, an island of grey that is slowly sinking into a yellow sea.  Unless he thinks of something quickly, he will die. 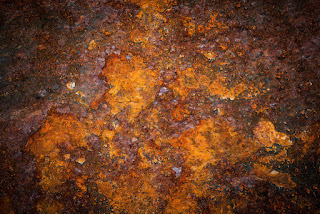 A xantherium is more like an infection that materials can catch.  Just like rhinovirus colonizes the wet epithelial lining of our throat, so does a xantherium move along the interface of two different materials of vastly different densities (most commonly air and stone).  This is an oversimplification, but it's a start.

You can deal trivial damage to it by damaging the material that it moves through (e.g. chipping away at the stone floor) but it is likely to encircle you before you can deal more than a point of damage to it.

It moves at the pace of a tortoise.  It is attracted to the smell of meat, and a trail of blood can be used to lure it.

Attacks -- It gets 3 bites per turn, no two of which can be made within 5' of each other.  Each attack bites off about a foot of material and swallows it, dealing 3d6 damage.  Imagine a crocodile sticking its snout out of the floor and taking a very fast, very sharp bite.

Weakness -- It has a weakness.  You can pick your own, but I like sound.  Vibrations in the stone.  These drive it back, but they do not damage it.  Any sound lound enough to drive the Xantherium back is also loud enough to incur a roll on the wandering monster table.

Sound doesn't cause it pain.  It's closer to disgust, or religious revulsion.  (Simpler creatures are motivated by things such as pain and pleasure, but the Xantherium is a philosopher, and its prime motivators are philsophical in essence.  However, the mind of a Xantherium is so alien to us that this information is almost meaningless to a prospective interviewer.)

If it is ever cornered by the disgusting chimes, it will manifest itself (nearly) fully in our own dimension.  See below.

Eight arms sprouting from a shared nexus, shaggy and bilious yellow.  Each terminates in a trio of spade-like claws, which it normally uses to pull itself sideways through space.  (It is a mole, deep down.  If you have a mole in your party it may be able to communicate.  No other creature has a chance.)

Four arms point up, and four staggered arms point down, but they are all the same arm.  (This is literal--any injury to one arm is mirrored on the others.)  It is about 10' tall.

You will only see this form if it is desperate.  Expect it to fight as a desperate animal would.

The Staff of Quiet Bells

A metal quarterstaff, hollow and with an octagonal footprint.  When held against the floor and rung, it creates a muffled chiming that drives the Xantherium away without provoking any wandering monster checks.

If held in the middle and rung overhead, it makes such an ungodly clangor that you can basically pick how many wandering monster checks you want to invoke.  It can be heard up to 3 miles overland, on a dry day.

Honestly, you could leave out the Beast Form and it would probably work better as a Lovecraftian horror.  (If you can kill it with a sword, it's not very Lovecraftian.)

I only included the beast form because that was how I originally conceived of it, and now it persists as a vestige.  I also like being able to make everything in the dungeon theoretically killable, because I'm a completionist at heart.

Is the weakness to sound a good idea?  Maybe.  It's better than fighting the stain with a sponge and soapy water.

You could do light.  Daylight is a little too scarce for a dungeon, though, and the party's only option would be to flee.  Torchlight has the opposite problem, and is a little too easy to provide.  (Sound at least, incurs the cost of a random encounter roll.)

If you were going for something truly Lovecraftian, the worst you could do is something like an emotion.  I mean, it might be fun to have the PCs make out and confess their feelings to each other in order to drive back the stain, but a cornerstone of Lovecraftian horror is that there is absolutely nothing of any value in a human's mind, body, or soul.

Water might be a good one.  (Holy water, perhaps.)  But then you run the risk of the party buying gallons of water in order to trivialize the Xantherium.  (This may be acceptable or possibly desirable, depending on the dungeon.)

This absolutely isn't something that you can just drop into a game.  It requires careful consideration of two factors.

1. What can drive the Xantherium back?

2. How will the players learn of this weakness?
Posted by Arnold K at 11:58 PM