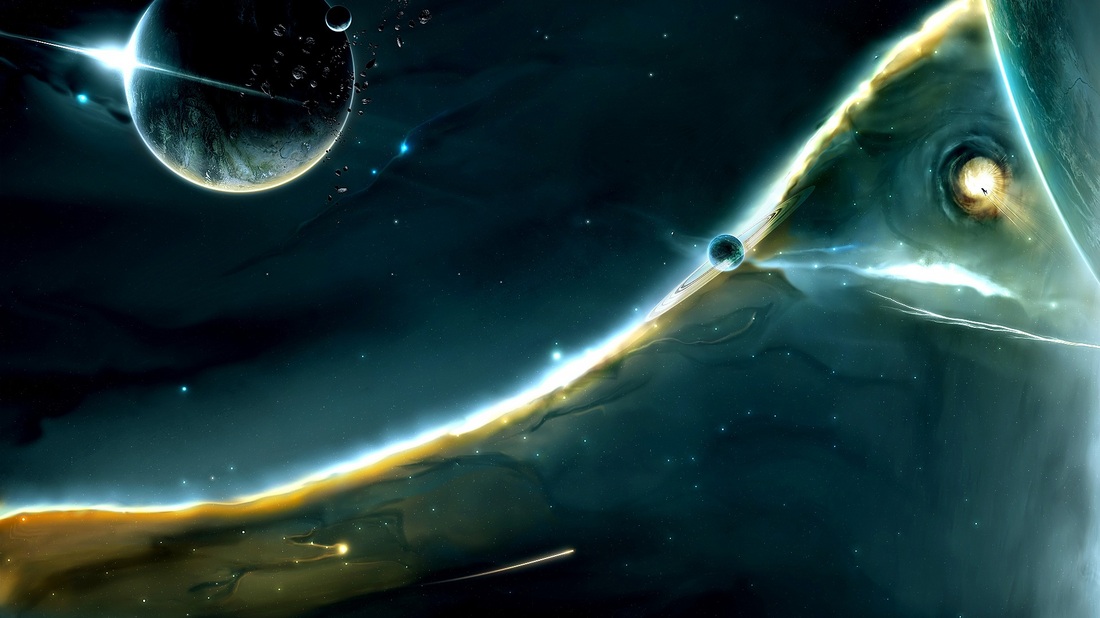 Space, as you think of it, is composed of two main parts.

There is the Astral Sea, in which all of the planets and solar systems are embedded.  (Light from the Astral "water" doesn't penetrate the ozone layer, but as soon as you leave the planet, you'll see it shining in all its glory, like an ocean of thin, pearlescent mucus.)  Picture a universe filled with thick spiderwebs, and then sailing across the surface of those spiderwebs as if you were a very tiny ship.

<digression>It's not hard for mid-level characters to sail into space.  Here are some possibilities:

Hell, you could do any one of those things before level 3.</digression>

Then there is the Beyond.  It is everything else.

In practice, this means the parts of space that are very far away from the surface of the Astral Sea.  Away from the egg stars and the light-hives.  Nowhere near the mirrored pillars of creation.  Away from the beaconed sea-highway that leads to the Seat of the Authority himself.

There are dead planets.  Cold places where no light has ever shined.

There are the tessuract-ships of liches, who have finally found the peace and quite they could never get on Centerra itself.  Tomb-cities buried deep beneath the crust.

There are elf-seeds.  Impenetrable spheres of runed adamantine, carrying the belongings of some elf lord forward a billion years into his kingdom at the end of time.  They will survive the heat death of the universe, when the elves will return to claim them.  Time machines traveling one hour per hour.  Just fancy luggage, really.

And then there are the creatures that were born out here.  These are the beyonders.

There are many kinds of beyonders, of course.  These are just the ones that are encountered most often in dungeons.

It is rumored that they are related to the organic satellite-people that orbit Centerra (although the planet is more accurately called Phosma) but this is probably untrue.

Out in the beyond, they look like large hula hoops of flesh and organs.  They're about 60' in diameter.

So how does a fleshy hoop explore a dungeon?

They do so by creating a portal.

The portal is shaped like a human.  A round, innocuous bubble-shaped human.

They can seal the skin of this portal with something akin to glass.  Which is good, because otherwise they'd just be human-sized holes in space, sucking in crap from all over the dungeon and blasting it into empty space, where some of it would presumably collide with the Beyonder.

When they are walking around a dungeon, they look like a man inside a bubble-suit.  Opaque and dully reflective.

At will, they can open up part of their body as a portal and suck stuff in.

They can open up their hand to suck in a coin, and close it smoothly behind it.

If they open up their chest, they can suck in things as large as a human.

They have to be careful with this tactic, though, because anything that gets sucked through is also being shot at their own body, which is a fleshy hula hoop encircling this portal.

They have some telekinesis.  They use this to catch stuff (coins, weapons) and pass them back outside the portal to their bubble-body as they are needed.

Immune to non-magical slashing and piercing.

Summon Skin -- Create or remove the glass-like bubble skin that covers the body-shaped portal.  Usually only has a certain patch open at any given time.  Free action.

Portal -- Unless there is bubble skin covering the portal-body beneath, the Beyonder sucks stuff in like a tornado.  5' away = Str check with a -4 penalty.  25' away = Str check.  No effect beyond 30'.  Once you get sucked up, you get a second chance to catch yourself if there is something between you and the Beyonder that you could potentially grab onto.  And yes, if you get sucked through the portal, you can remain conscious for one round while you stab the Beyonder's flesh-body in its stupid flesh-face.


If the bubble skin is broken (or if the Beyonder turns it off), the Beyonder isn't defeated, but it is probably getting smacked in the face by all the stuff that's being sucked through.  Getting bathed in cold air is extremely unpleasant, and most Beyonders won't endure it for more than a couple of turns at a time.

If the bubble skin is broken they can regrow a new one tomorrow.

Even if the bubble skin is broken, it isn't immediately obvious that there is a ring of flesh 30' into the portal.  The easiest way to discover this is probably to throw a torch through.

Beyonders aren't stupid, and as soon as they realize their foe has figured out how to damage them, they'll withdraw (which is as simple as closing the portal).  They'll probably come back later.

By the way, they can't teleport their bubble-skin body all over the planet. Whenever they re-open their personal portal, they can only re-open it in the same location where they closed it last time (or at least, within 10' of that point).  This means you can imprison one, as long as the walls are at least 10' thick.

Each Beyonder also keeps 1d3-1 things on hand that they can throw back out their bodies in case things get desperate.

Holdout Weapons [d6]
1. Just a big brick of chlorine.  Quickly evaporates into a gas upon hitting our atmosphere.  As acid cloud.
2. 2d6 legless ghouls.  (Space is full of ancient, insane ghouls.  They're about as common as hailstorms.  Most cut off the unnecessary bits and throw them in order to gain some momentum in space.)
3. Captured light from a dead star.  3d6 necrotic damage, 100000000' cone, save for half.
4. A jet of dust going 400 miles per hour.  Functions as a 30' line of piercing damage that does 3d6 piercing damage each round for up to 3 rounds (as long as the Beyonder concentrates).  Half damage if you succeed on an Armor save.  (Roll your AC like a save.)
5. A lump of lead the size of a VW bug.  Treat this as a melee attack roll (it can't throw the lump very far) with a -4 penalty (it's not very accurate) that does 3d6 damage and pins its target.  The lump is so cold that it sucks the heat out of the room, dealing 1 cold damage on each each subsequent turn for an hour.  Ice will form after 1 minute.
6. A domesticated florgurg.  Just tentacles and teeth.  Sings like a whale being sucked down a garbage disposal.  HD 3  AC leather  Grab/Grab/Bite 1d12.
Posted by Arnold K at 2:54 AM