Goblintown has many jewels, but most prized among them are the Seven Deadly Stinks.

Goblins are uniquely capable of savoring the fine distinctions of these great stenches, while humans often lack the necessary nasal apparatus.

When collected fresh, the Seven Deadly Stinks make for a kingly gift.  Not only are they a source of civic pride--delicacies that only Goblintown could produce--they are also fun to smell.  While they are occasionally stored in jars and savored over months (much like humans and their whiskey), it is more common for the Stinks to be consumed in a single evening by the recipient and their close friends in a bacchanal of nausea, feasting, music, and vomiting.

In fact, the successful collection of the Seven Deadly Stinks offer a way to escape Goblintown (and "win" the module).  If presented with such a gift, it is likely that Gorp, Son of Gorp will wipe a single yellow tear off his cheek and order the reopening of the Tunnel Road.  The PCs are invited to the stink-party, of course.

If the PCs are given a quest to collect the Seven Deadly Stinks, they are paid after the delivery of each Stink, with a large bonus paid after the set is completed.

The Seven Deadly Stinks may also be given out as a punishment, much like the clearing of the Augean stables. 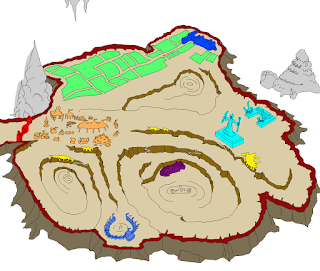 The Stinks are usually collected in wide-mouth jars manufactured for this purpose and then sealed with stretched goat bladder and twine.  If the Stink is gaseous, a sealable jar is a requirement.  Each of the different Stink Jars has a different ugly face on the front, as dictated by tradition.

Be sure to use nausea rules for these.  I enjoy calling for a Con check.  On a failed save, you spend one round vomiting.  Regardless, you get -2 Attack and AC as long as you are exposed to the stuff, but you can postpone this penalty by 2 rounds by plugging your nose and holding your breath.

All of the sewage of Goblintown washes through the streets.  It passes through the poorer-and-therefore-less-filthy upper reaches and into the decadent garbage-maze that is Lower Goblintown.  It eventually ends in one of three large sewage pools.  The deepest and oldest of this gritty sludge is known as That Ol' Sludge, and it is much more potent than the upper layers.  It stinks of feces and rotting seaweed.

The difficulty is two-fold.  First, it is difficult to get to the bottom of the mucky pond, which is much denser than water, and with a consistency of mud.  Water breathing doesn't work on such sludge.  Second, the bottom of the pond is covered with sharp bits of metal and medical waste.  Ropes may be severed and incautious fingers may be cut open.  The pool contains a veritable apocalypse's worth of disease, and anyone diving to the bottom must save against 1d4 different diseases, or 2d4 different diseases if they have any open wounds at the time.  Goblins who make the dive usually die from the various diseases over the next few days, even with their prodigious natural resistances to filth.

Heavenly sludge is traditionally scooped by hand.  While you can paddle out in a little canoe and stick down a bucket at the end of a 20' pole, there is so much garbage (rusted metal, rotten wood, piles of fish bones) that the bucket cannot reach the deepest layers.

You have three choices of which pool to dive.
2 - Trolljoy Treacle

Trolljoy treacle is produced by people (including goblins) who are infected with Trolljoy, a kind of dysentery.  The sufficient amount can be collected in five days of treacle sickness (or one day, if five people are sick).  This amount is then boiled down into a more concentrated form and presented.

Trolljoy is a common disease in Goblintown.  Although it is not hard to find a goblin suffering from it, their powerful immune systems usually clear the disease in three days or less.  And of course, anyone emerging from one the filth pools has probably contracted the disease.

To manufacture this delicacy, you must first pile a bunch of dogs together into a pile.  At least 20 will suffice.  Dogs can be bought from goblins, or they can be captured, as many mangy packs roam goblintown.  The pile of dogs must be stacked up in the center of Goblintown, because the formulation requires sunlight for proper putrescence, and this is the only part of Goblintown that enjoys the most sunlight (from the caldera rim, thousands of feet above).

The real challenge here is to keep goblins from stealing your dogs.  Twenty dogs represents a fortune of caloric wealth in Goblintown, and there are no shortage of desperate goblins.  DM Advice: Goblins will try running up and stealing dogs, but they'll also try digging tunnels, fishing poles, and releasing a giant grub as a distraction.  Your players always get to scheme, but now it is your chance.

After a couple days of rotting in the sun, your dogpile is ready for harvest.  (Your stink-sommelier can advise you on the exact timing.)  All of the dogs are thrown into the ceremonial dog-press and squeezed, and the juices collected.  Then the dogs are set on fire, and allowed to burn to near completion.  A few of the larger chunks are thrown into the jar of dog juice and voila!  C'est fini!

There is a sulphur vent behind the temple.  The goblins claim it vents stenches directly from the pits of hell, and it certainly smells plausible.

At the bottom of a 100' crevasse/stairwell is the circular pit, 20' in diameter.  A narrow pillar of yellow-green gas rises from the exact center, where it disperses against the ceiling 30' above.  Fire-things emerge from the pit as soon as they are disturbed (via light, noise, or sight).  They resemble boiling black slugs the size of men, with long lashing tendrils.  If a tendril is severed, it collapses into a burning liquid, like lit gasoline.  Stats as small fire elementals, except the movement speed is halved and their reach is increased to 10'.

To harvest this particular stench, you must piss on a fire-thing (or fire elemental) and harvest the cloud.

First, you must get a hold of a century egg.  This is an egg (of any sort) that has been buried underground for so long that it has turned black and gelatinous on the inside.  You can buy them for about 100g from any goblin that has enough patience to grow century eggs, or you can steal it from them.  It'll usually be buried under a room in their house somewhere.

There is a famous roper that lives in the center of an intersection in the ruins of Old Gobintown.  He is called King Bad, and you must feed him the century egg.  This usually involves a decoy or a ham stuffed with the century egg.

King Bad will vomit a nacreous liquid that smells of rotten flesh and acetone.  It must be scraped off the roper's chin before it dries.

7 - The Fart of the Stirgewife

The stirges that you see flying around are all male.  The hive that they return to, the thing that looks like a dozen huge clams fused together, that is the female stirge.  Or rather, multiple female stirges fused together.  The house wife is both house and wife.  About two hours after eating a large blood meal, the stirgewife will fart.  It smells of blood, ammonia, and rancid butter.

Any goblin can tell you that the first step in harvesting this delicacy is to fill a bunch of goat bladders with goat blood.  (I know that a lot of goblin plans begin like this, but bear with me.)

Then, all you have to do is find some stirges and wave the goat bladders at them.  10' poles are recommended.  The stirges will drink their fill and then depart back to the stirgewife, in order to disgorge their blood meal.  For a while, the stirges will be quiescent.  They do not hunt unless their wives are hungry.

When you see the fart occur--and you cannot miss it--you must run past the hive very quickly and catch the fart in a jar.  And then continue running, because stirges will swarm anyone that gets near their wife.

If you really want to impress Gorp, son of Gorp, you may also wish to present him with a pierbatgrub, which is made by stuffing a piercer with a dire bat, which is in turn stuffed with rot grubs.

Some of these challenges are a little open-ended.  Your players will have to come up with clever ways to harvest the sulfur cloud, for example.  And the ways listed above are simply the traditional goblin ways of doing things, not necessarily the best way.  (You don't actually have to piss on a fire-thing, for example.  You can just throw a bucket of piss on top of it.)