There are assassins, and then there are Assassins.

While assassins are more numerous, more effective, more discreet, and completely unaffiliated with each other, the Guild Assassins are famous, ludicrous, and follow a strict code of operations.  They are deadly buffoons.  Your players will probably love killing them.

But first, some ordinary assassination strategies.

Frequently your players will piss off someone rich enough to hire an assassin to kill them.  These are usually mere assassins, because they are cheaper and more effective.  Throw these at the players.

They don't have anything in common.  They wear effective disguises, or they attack with surprise and then flee as soon as possible.  Each assassination attempt will involve 1d6 assassins of level 1d8 - # of assassins.

1 - Barricade the door of the place the PCs are sleeping in, and then set it on fire, preferably by throwing molotovs in their window.  They carry crossbows to snipe the players as they flee, and they always put something sharp under the window in case the PCs jump.

2 - The food is poisoned with a powerful emetic.  As soon as the players begin to succumb, call for a Con check.  Those who pass spend one round vomiting, while those who fail spend 1d6 rounds.  The assassins attack when the PCs are the most vulnerable.  The fight is complicated by all the innocent people running around screaming.  At least one of the assassins is impersonating a cook, and attacks with boiling soup, pepper bombs, and/or meat cleavers.

3 - Lassoed on the road.  The assassins approach from the opposite direction while on horseback.  Each will attempt to throw a lasso around the neck of a different PC and then gallop off.  The ropes are tied to their saddles, so they can fight and drag someone at the same time.  They supplement this dragging with crossbow bolts at the first opportunity.

4 - They attempt to split the party.  Someone tries to lure the PCs into a room, preferably a basement.  "I'm selling some cheap drugs, come see them."  "My son is very sick, can you help him?"  "Let's go have sex somewhere private."  Then the door is slammed shut and quickly locked, and the lured PC/PCs must deal with assassins (whose eyes have partially grown accustomed to the dark, half the penalty for fighting in darkness) while those outside must deal with assassins trying to shoot them from outside.  All assassins involved have escape routes.

5 - Challenge one of the PCs to a duel outside of town.  Insist that the non-dueling PCs travel without weapons as a sign of good faith, and will strip down to show that they are not carrying any weapons either.  As soon as they are out of town, they all pull weapons from a nearby bush and attack the PCs.

6 - Guerilla tactics in the streets. First, they fire a couple volleys of poisoned crossbow bolts from a rooftop before fleeing.  Then the attempt to run the party down with a carriage (or at least some horses) before quickly fleeing.  If none of these tactics work, they'll get impatient and attempt murder in broad daylight (unless that seems infeasible, in which case, they'll switch to a different plan).

The House of Glass and Gossamer

The Guild of Assassins operates out of a secret location somewhere in Kathar.  It is usually described as a subterranean mansion, located in its own private cavern, complete with false trees and a huge lantern in the ceiling that fills the role of sun.

It is a trick house, full of literal smoke and literal mirrors.  Even the secret passages have secret passages.  There are noise-makers under every third floorboard, steel bars disguised as wooden ones, and all types of quick exits.  Everything else is designed to confound a visitor's senses of size, distance, and time.

It is said that every surface if poisoned, as well as every food.  There are even paintings that will poison you if you look at them for too long, and music that will turn your blood to venom if you ever hear the nocturne played to completion.

The sickly-looking girls that staff that house are given strict diets of poison from the time of their birth.  They are poison, too.  Don't touch them without gloves.

Trained vipers nest in the walls, and are controlled by flutes that the girls carry (although the songs are intentionally difficult to master). 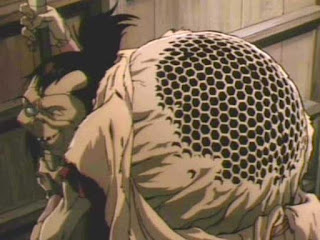 All guild assassins have two things in common: they always give warning before they strike, and they always use a calling card that allows their prey to identify them (if they ask the right people).  They always give a full 12 hours notice before striking, and then they attack when the time is the most opportune.

All of their weapons are poisoned, and all of them have effective means of fleeing a battle that is going poorly.  Each one employs 1d6-1 informers to keep tabs on the PCs.  They have a 5-in-6 chance of attacking with surprise.

1 - Goren Kriegod signals his approach by circling the town on his elephant.  He yells; the elephant trumpets.  He attacks by ambush, after having smuggled his elephant into town aboard a ship disguised as cargo, or paying people to look the other way while moving the elephant down midnight streets.  So yes, his entire strategy is "elephant sneak attack".  He attacks by throwing molotovs and harpoons.  He is a high-level monk.

2 - The Velvet Knight is a man inside velvet-covered heavy armor.  He is heralded.  by the smell of roses, as he hides potpourri near his intended targets.  He uses his velvet-cushioned steps to sneak up on people.  He makes his assassination/sneak attack attempts with a greatsword that has been pained matte black.  His shadow is a shadow, and it fights alongside him.  If things appear to be going badly for him, he reveals his trump card: his associate has taken a hostage and now has a dagger to their throat.  He is a high-level assassin.

3 - Grandfather Fern is a high-level druid.  He is heralded by tiny birds, who bring a blood-soaked fern to each of his intended targets.  His entire shtick is that he dominates local domesticated animals and gets them to attack the party.  He's really good at this, and can do it from a distance, without the usual restrictions of the dominate spell.  He usually watches the chaos from a nearby tree, wearing his ridiculous stick and leaf camouflage.  If he gets really desperate, he'll start dominating wild animals, too, but he feels bad about this.

4 - Lady Nightingale is a high-level assassin.  She is heralded by a severing ring finger, which she will arrange for the PCs to discover inside a flower.  She attacks with two cassowaries (HD 3, AC leather, claws 1d6 exploding) that disguise themselves as her dress.  Her snake tattoos are actual snakes that have been glamoured.

5 - The Pangolin wears a apiked adamantine pangolin cloak.  The spikes are poisoned, and anyone stabbed must save vs hallucinations.  She is heralded by violence, and always carves her challenge into the skin of someone/something that the PCs care about (such as the hide of their favorite horse).  She can use her pangolin cloak to roll up into an armored ball and pursue the players, but is incapable of rolling up stairs or hills.  She is capable of crashing through wood and plaster walls while in armor-ball form.  (If worn by anyone else, it loses this wall-smashing ability, although the wearer can still roll around inside a spiked adamantine ball.)  If she suspects defeat, she will self-destruct: players must choose between an easy roll to escape the scene versus a difficult roll to defuse the bomb.

6 - Dreadmite is capable of shrinking herself to any size, the result of winning a bet with a leprechaun.  She is heralded by extremely tiny letters written on extremely tiny objects, such as a lengthy proclamation of assassination written onto the back of a cockroach, which is then placed inside the PC's coinpurse.  She will attempt to crawl in one of the PC's ears, where she will then take them hostage.  She will attempt to get that PC to lure all of the other PCs into extremely dangerous situations in the hopes that they will die.  She can hear, but not see, everything that goes on.  If this plan goes to shit, she will just stab the PC in the brain with her spear (save or die, success results in unconsciousness).  And although no one has seen it and lived to see the tale, Dreadmite is capable of growing to giant-size as well.  In mite form, cut her HP in half and give her a ridiculously high AC.  In giant form, just double her HP and use giant stats.