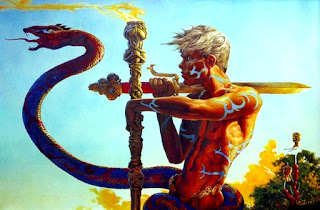 Sane people who have not been there regard it as a single city, occupying a single point on the map at the south tip of the Meltherian peninsula.  Those who have been there know better.

It is tough to tell.  It grows with each retelling, and expands with each visit.  It is called the Armenjero Empire.

It is the gateway to Ba Dwai La and the electric mismeras of Langa.  It was won from one of the mage-kings of Meltheria, the Judge of Green Hours, in a dice game, in which the legendary gambler Tammergale waged his life twice on a single flash of the pips.

He won, of course, because Fortune was terrified of Tammergale, because Tammergale alone knew how to kill Fortune (and he kept the tools in his belt pouch, it is said).

The buildings hang like red lanterns, swinging from their red chains.  The buildings gamble, just like the people inside them.

Or the buildings stick out from the cliffside like an outstretched arm, holding a cup of tea.  And people do come here for tea as well.

And there is the City of Light, a nest of lighthouses, some leaning out from the same base.  The lighthouses are home to strange families, who compete against each other in contests of light-making, mirroring some arcane instructions delivered by the planets' wanderings.  They murder and marry only each other.  Many of the lighthouse keepers are blind.

But most of the city is built into the cliff wall, amid winding terraces and shrouded arcades, where the path disappears into the rock.  All the doors are secret doors, and all the people hidden.  This is where velveteens are made, and a jester's motley is more respected and feared than a knight's emblem.

It is a city of bards, gamblers, story-tellers, performers, tumblers, prostitutes, and actors.  They all have their secret clans and historic ambitions, but it is the last category that concerns us for now. 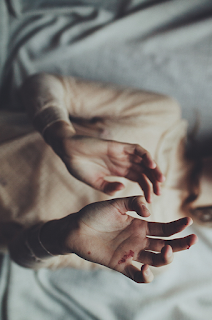 The largest organization of actors in Centerra is the Never-Ending Guild.  They produce the greatest actors in the world, and the greatest of those are kept inside the guild as teachers.  They excelled too much as students, and are now forbidden to leave.  They pass through its halls wearing long chains of silver and enamel.  Their students gift them with newer lengths of chain, extending the distance that they wander.

Their actors are famous for the use of mimra, which is the practice of smoking live mephritic toads.

The toads are powerful dissociatives.  They are famous in storytelling for their ability to cause a suggestible form of amnesia.  It's the pharmacological analogue to the jedi mind trick.

Hammertoe the Poisoner: "Your name is Ricarlo, a horse seller.  You were just about to pay me the 400 gold you owed me."

The actors of the Never-Ending Guild use mimra to literally assume the role of the person they are portraying.  It involves a conscious self-deception, which lasts as long as the production does.  It also requires many, many dead toads.

By interleaving periods of toad-blasted delirium with periods of relative lucidity, an actor is able to live in a theater like a normal person, while functionally becoming their role while on the stage. 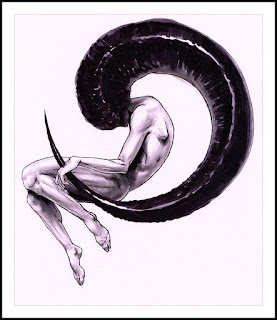 The greatest service that the Never-Ending Guild can offer isn't actors, nor is it glass spheres filled with toad shavings and combustibles.  It is immortality, and nothing less.

In the Never-Ending Halls, people who have died sometimes show up for dinner.

Vega has an apartment there, the wizard who created both goblins and the apocalypse maggots.  So does Ashar Mevrock, the tyrant who almost conquered the entire continent of Centerra.  Even, the Prophetess Ianu, who founded the religion of Hesaya, can sometimes be seen in the dining hall, mopping up soup wit her bread.  Each of them drags a silver chain by their ankle.

These are actors, but they are also the people they portray.

If a woman smokes enough mimra and recieves a steady diet of who-she-is, what-she-cares-about, and what-she-is-like, she will eventually emerge on the far end as a blasphemously accurate facsimile of the Prophetess Ianu.

There's a bit more to it than that--minor cosmetic surgeries, the collection of historic possessions, the establishment of a supporting cast--but that's the general gist of it.

The resulting Prophetess has absolutely no memory of her previous life, and she is accurate enough that even angels are deceived.

But is it deception?  How much of a person is reproducible from their artifacts?  How well can we reconstruct them from the testimonies of their friends?

Hanchurium Without Parallel was a king, and a good one.  But when his last son died fighting a foolish war, he became cruel and distant.  His own family killed him.  And then the family purchased a new Hanchurium from the Never-Ending Guild, a slightly younger Hanchurium, one who hadn't been spoilt by the war.

By all accounts, the new one was just as good as the old one.  Or perhaps better.  While the generals varied in their exact opinion of the newer Hanchurium, his wife preferred the new one.

And there was never any hesitation, nor any display of doubt.  The new Hanchurium slid into the throne as if he had been sitting in it yesterday.  He kissed his wife as if he had been kissing her for the last thirty years.  And he walked through the kitchen as if he knew what was in every drawer (because he did).

The Never-Ending Guild had done their job well. 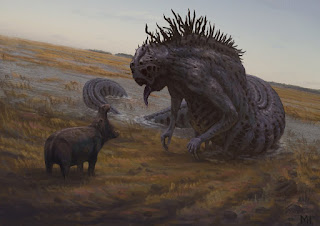 How To Use The Never-Ending Guild

Use them for immortality, of course.

By visiting the guild, paying a hefty fee, and submitting yourself to some interviews, you can become immortalized.  Then, when you die, a replacement can be purchased from the Guild.  It only takes a year to train a new you.

I say "interviews", but really the process is several weeks of intensive, drug-fueled interviews, intermingled with certain scenarios.  The most accurate way to capture a person's identity is to observe it in a variety of scenarios, and so that is exactly what they do (with a mixture of drugs, illusion, and recreation).  And then a pair of tomes will be shelved, along with a fat portfolio of sketches.

And those two fat books are sufficient to resurrect a man, all by themselves.

Do not flatter yourself.  A single book is sufficient to recreate your entirety.  The second book is only for the sake of redundancy.

And honestly, if you can't think of a use for an asylum full of accurate recreations of famous people, shame on you.

That long-dead wizard who built the ruins the party is currently exploring, he lives here.  He plays chess with the Prime Deceiver, the architect of all evil in the world.  They are just flesh and blood, and they do not have the power to shatter the continents, but you might be amazed at what they know.

They know a great deal more than they have been taught.  The whole is greater than the sum of its parts, et cetera.  Through data mining, implication, and the insight of the insane, they are more accurate then they should be. 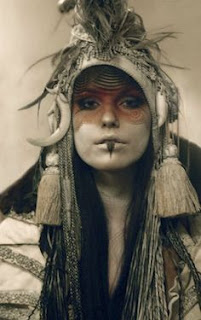