This is my Week 3 contribution to Dungeon23.  I'm writing a dwarven puzzle tomb.

I'm trying to take my own advice on puzzle dungeons to see if my advice is worth a damn.  Turning theory into practice, that sort of thing.

The dungeon is built around the idea that this is a puzzle tomb that is easy for dwarves to navigate, but deadly to humans.

Because of this, the players need to enter the dungeon with a basic knowledge of what dwarves are like.  This takes the form of a hand-out (which should all be familiar information for anyone who's played DnD before).

This is sort of the over-clue that informs a lot of the puzzles.

The first puzzle at the entrance relies on this knowledge (dwarven infravision allows them to see the temperatures of objects) and is probably trickier than the next few puzzles but I wanted to make sure that players were thinking along the axis of "easy for dwarves, deadly for humans".

This is only the first few rooms, so the puzzles are pretty simple--mostly meant to familiarize the players with how a puzzle dungeon operates.

The diorama puzzle is the weakest of the bunch and I am almost certainly going to overhaul it when I rewrite these rooms (for like the 4th time, lol).

If anyone has any ideas for improving the diorama puzzle, let me know in the comments.

There's a shitty little draft map in the PDF, but you can see that the dungeon has a tree-like shape.

I'm doing this because I want to utilize soft-locks, so that the players will only have ~3 puzzles to work on at a time.

You don't want to put all of the puzzles in front of your players at once--it's overwhelming.

Inversely, you don't want to have your puzzle dungeon simply be a linear chain of dungeon rooms presented one after the other--it's boring, and if you get stuck on one puzzle, you can't take a break and go work on some other puzzle.  You're stuck with the one puzzle that's frustrating you. 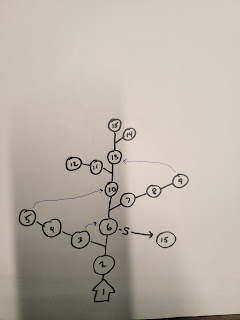 Here's a sketch of the dungeon layout from last week.  In this sketch, room 3 (the one with the three statues) has to be encountered before room 6 (measuring across the floor) can be solved.  Likewise, room 5 (the diorama) is required before room 10 can be solved.
If you work your way through the drawing above, and imagine how players might hypothetically progress through the dungeon, you'll see that they have ~3 puzzles available to them at any given time (except at the beginning, when they have less).
This is what I mean by flow control.
Benefits:
Because there are 8 tombs in this dungeon, and they are all arranged in the order that members of the dwarven work crews died, it allows me to tell a story of how the mountain was excavated.  Players will learn which dungeon areas are near the surface (excavated early) and which ones are at the bottom (excavated later) and how the whole dig got much more perilous as the project grew.
Puzzle dungeons benefit more from flow control than other dungeon types.

Here are previous entries in the Dungeon23 thing.