I'm thinking about expanding and rewriting Lair of the Lamb.

Refining the Lair of the Lamb

The Lair of the Lamb is alright.  It was meant to be a teaching dungeon, and to teach about consumables (light, water, food), time, and the importance of running away.  It mostly succeeded in that goal, but it could use a lot more guidance for the DM.  A lot of feedback involved

I should probably remove/rewrite the stupid drowning ghost (better on paper than in practice).

The spiders in the crack are also unnecessary--there's no harm in letting people talk to the merchant longer.

Vandress and the sleeping priests are a lesson to teach (a) rooms are sometimes interconnected, and (b) secure the area before you start messing with things.  Vandress should probably have a spell that is well-suited to killing 1-2 PCs, but not more than that.  Vandress could also use more fleshing out.

Akina needs more fleshing out, too.

Refining the Gallery of the Ghouls

The Gallery needs a more substantial rewrite.  The purpose of this section was to allow the PCs to slow down, decompress from the Lamb segment, and learn about: investigation, exploration, negotiating with dubious NPCs, and puzzle-solving.  People tend to just rush through, without exploring the level much.

The ghouls will probably be fed some priests, so they'll probably be friendly and chatty when you first interact with them.  The PCs should have an opportunity to explore the area.

The goal--exit the dungeon, is confounded by the ghouls, who refuse to let you leave because they cannot leave.  Leaving will either involve killing the ghouls, tricking the ghouls, or befriending them.  Befriending them can involve several things, but one of them is certainly to find the missing fifth ghoul, and/or remove the ghoul fence.  They have about 24 hours--until the ghouls start getting hungry again.

The ghoul fence should be replaced with a sanctum septum.

A sanctum septum is a general term for a certain type of seal constructed by the Church to seal off an area or prohibit a certain action.  There are many, many varieties.
One variety is a saint's hand atop a pole.  A piece of black twine is affixed to each finger.  The five threads spiral down the hand, and then down the pole.  Or perhaps they radiate, where they can be affixed to the walls.  Or they are woven into a loop, which is used to bind a cursed item or creature.
Another variety, is the nine eyes against chaos.  This is a symbol written onto scrolls, which are then nailed around the area.  Another version is a bronze tablet with the same symbol, sitting on a circle of dried ink.  Unbroken calligraphy flows out from the circle, guarding the area that is to be sealed.
Penalties for breaking the seal vary.  The most famous ones are an immediate sky execution or a hell summon--an immediate decapitation, where the severed head falls through the floor and straight into hell.
More commonly, however, breaking the seal merely summons a guardian.  The most common guardian is a pair of solamani.  A solamanus resembles a gigantic hand, a handspan the size of your armspan, with an eye in the palm.  They are draped in chainmail and amulets.  (The amulets determine what abilities the solamanus has, and with experience, you can learn to recognize them.)
Solamanus
Lvl 4/6  Def chain  Slam 1d12/2d8 + Grab
Fly  Int low  Str high  Dis guardian
Holy - Double damage to demons, undead, and warlocks.
Undead - If a solamanus is turned, it desummons for 1d6 rounds instead of fleeing.
Spells (2/3 MD) - knows revive solamanus and one other spell.
1. wall of fire
2. pacify
3. mirror image
4. summon serpent
5. glue
6. spell reflection
Revive Solamanus - Touch dead castromanus to revive it with 2*[sum] HP.
Pacify - Target cannot attempt actions that cause direct damage for [sum] turns.  Splittable.  Save negates.
Summon Serpent - Summons [dice] serpents.  Lvl 0  Def leather  Bite 0 + poison (1d6).
Glue - two touching objects become fused together.  Affects small areas: a palm, the sole of a foot, etc.  Creatures get a save (this extends to held or worn objects).  1 MD lasts [sum] rounds.  2 MD permanent.  3 MD - affects large objects and areas, 4 MD - permanently fuse two creatures into one (at least one creature must be willing; if you have two unwilling creatures then two people must cast this spell simultaneously to have a shot). Splittable.
Spell Reflection - Reflects the next spell that hits you.  Ignores spells that have more MD than are currently invested.  Covers you in a glowing aura (so it's obvious that you have some sort of protective aura).  Splittable.

This is what's below the Lair of the Lamb.  I figure it can be keyed in 15-20 rooms/areas (but then again, I'm often too optimistic when estimating these things). 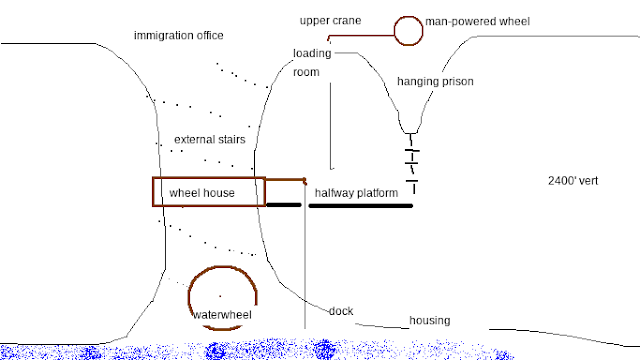 The Abyssal PIllar is a wonder of the ancient world--a crane system used to raise and lower things from the Underworld to the old city (the ruins below Lon Barago).
I'll have to shuffle some rooms around, but the elevator in LotL is built using the old windlass.  Move some rubble, open the hatch, and you can look down into a pitch black abyss.  If you fall, it's 2400' before you hit anything.
Stand on the south side of the lip, though, and hold a good torch, and you'll see a little ledge a ways off.
If you dangle down into this darkness at the end of a 50' rope, and swing back and forth a few times, you could probably grab hold of it and pull yourself up.
(Digression: I went rappeling off an overhang once and it was the most intense physical fear I've ever felt.  The moment when you let go of the ledge and put all your weight on your rope. . . it's whole-body terro.  I actually feel uncomfortable just typing this paragraph.)
The ledge is an old balcony.  The wall falls away--there's more abyss beneath you.
East is the prison stalactite.  About 10-20 prisoners were kept there.  They operated the wheel that powered the crane.  There's a section where cages dangle on the outside from chains.  The bottom floor is inaccessible (door welded shut) but you can get there if you climb down on the cages and jump to it.  (It opens into a hallway-thing.  There's no easy place for a grappling hook to attach.  (Sidenote: can a shitty hemp rope arrest a falling PC?  2-in-6 chance it breaks.)
West side has a big room where people lined up in front of the main gate (now caved in).  Gate offices hold records.
A regular staircase down turns into a sketchy external staircase.  You are now descending around the circumference of the pillar itself, which is about 200' in diameter (or 630' in circumference).  Metal spikes hammered into the stone once supported a staircase, but that has all rotted away.  The spikes are sturdy and well made.  Each about 2' long and spaced about 1' apart.  As long as you go slow and take your time, you can descend on them safely.
Below, two albino apes have seen your light and are now climbing up to kill you.  You'll hear them coming well before you can see them.
Albino apes have the same stats as unarmed ogres with a climb speed.
The apes will attempt to throw people off the Pillar.  After throwing one person to their death, they'll probably break off the attack to go retrieve the corpse (unless the party seems very easy to kill).
They will recover the body and bring it to Toro the Death Knight, who lives at the quarry upriver.  He is holding their baby hostage (sort of).
The wheelhouse contains the body of the lower crane, a door to the halfway platform, and chain that allows you to climb back up to the bottom of the prison stalactite (if you still need to access the hard-to-get room).  It's a 200' climb up a chain, though.
The problem with climbing the chain is that there's no place to put your feet.  Your hands can grab the chain links easily enough, but your feet can't fit in the links.  If you had chicken feet, or pointy sabatons, climbing would be simple.  If you have a way to take rests (even just looping a rope around your waist and through the links) and a way to use your feet, you can climb the chain without any rolls required.  Without a way to rest, a Str check vs death is required to ascend.
At the bottom is the waterwheel that powers the whole thing, the remains of an ancient stone dock, and some stone houses.
Upriver is the old quarry.  Downriver is the Lake of Lamentations.
Posted by Arnold K at 2:02 AM

Email ThisBlogThis!Share to TwitterShare to FacebookShare to Pinterest
Labels: dungeon, lair of the lamb