This is my attempt at a comprehensive system for HP, Sanity, Death and Dismemberment.  All that good stuff.

HP stands for Heroic Poise.  This is your ability to survive the world's cruelties, both mental and physical without impact.  HP turns potentially deadly blows into bruises, exhaustion.  It also includes some intangibles such as luck and divine favor.  HP are "don't get hit points" but they are also "keep it together points".

Your HP is a reservoir.  They soak up bodily injury and emotional trauma similarly.  Once you are out of HP, enemy blades start to carve up your belly, and panic begins constricting your brain.  You no longer stand like a hero; you stand like someone in fear of their imminent death.

Anything that could reasonably kill a person deals at least 1 HP of damage.  Cats don't deal any damage, because cats have never killed a human (except through infection, or that one cat that I assume smothered a baby somewhere.  Babies have 1/2 a point of HP.)

When the world tries to kill you, you take damage, which subtracts from your HP.

Damage works the way that it always does, except that it includes emotional damage as well.  Your HP can be reduced all the way down to 0 without any ill effect, but any damage that your HP cannot soak up will Overflow and cause something bad.

Additionally, exhaustion can deplete your HP as well.  Run some sprints and I guarantee that you will not be able to defend yourself as effectively as if you were fully rested.  (Exhaustion counts as non-lethal damage.)

There's no penalty for being at 0 HP (except that you are very easy to kill).

Emotional damage is something that I've flip-flopped on many times.  It does make intuitive sense--once you realize that HP is not meat-points, you realize that it can be worn down by fear, depression, and despair.  I guarantee that soldiers do not become better fighters when they are panicked.

Emotional damage will be something rare, though.  You won't see it often.

Any lethal damage that is not soaked up by your HP overflows into your Wounds.  So if you had 3 HP and then took 5 damage from an arrow , you now have 2 Wounds.

When you gain Wounds, you start Dying.  :(

Dying characters fall unconscious and drop whatever they were holding.

Dying characters make a Stabilization check at the end of each round.  This is a Constitution check against a DC of 15 + Wounds.  Every person attempting to stop the bleeding (max 2) gives you +2 to this check.  Certain things (bandages) can give an additional +2.
Once you stabilize, you wake up in 10 minutes.  You have gained a scar and you feel like absolute shit.

If you gained Wounds from a critical hit, you gain a Disfigurement (e.g. a missing arm, but more on this later).  (See Disfigurement Table below.)

Disfigurements are permanent, and most will make your character weaker in some way.  Perhaps its time to retire?

So our example adventurer might wake up with 5 Wounds.  Their Max HP, formerly 3, is now 0.  They cannot gain HP until they remove the Wounds (since the Wounds are greater than the HP).

If they woke up with 1 Wound, their effective Max HP would be 2.

"Take a session off to heal Wounds" also serves another purpose: encouraging troupe play.  A player gets to experience another level 1 character, which could be a nice change of pace, plus it gives you someone to fall back on if your primary character dies.

If you stop here, and don't incorporate Stress (the next section) you basically have the same amount of bookkeeping as your average D&D version.  (Wounds are no more complex than death saves, for example.)

Here's a scrap of a character sheet I drew to illustrate it.  (It doesn't include Stress.)

Any emotional damage that is not soaked up by your HP overflows into your Stress.  Stress causes Breakdowns (short-term badness) and Derangements (semi-permanent badness).

Stress subtracts from your max HP, but cannot reduce it below 0.

If you have any amount of Stress at all, your Derangement becomes active (see below).

Whenever you gain Stress, you need to make a Stress check.  This is a simple check against a DC of 5 + Stress.  (Roll a d20 without any modifier.)

If you fail this roll, you have a Breakdown.

Whenever that character has a Breakdown, it is always the same one.


On future failed Stress checks, the character merely has a Breakdown (since the Derangement is already active).

Once your Derangement is active, you perform the bad behavior described.

When a character spends time in a safe place that is peaceful, Stress is removed and the Derangement is inactivated.  Once the player spends a session playing a different character, the Wounds are removed.

Since emotion damage is rarer than physical damage, we can assume that characters walking around with Stress will also be rarer.  However, the Derangements are pretty shitty, so it balances it out.

Some characters will have worse Breakdowns and Derangements than others.  These are the ones that will probably be asked to read the Latin.  This is as it should be.

Emotional and physical damage are ablated by HP, but there are ways to sidestep this buffer.

Horrific Lovecraftian shit will bypass your HP and deal you Stress automatically.

Similarly, an attack against a helpless character (asleep, tied up) reduces their current HP to 0 and deals its damage entirely as Wounds.

An army hospital is safe and has medical care, but it is not peaceful.

A farm is safe and peaceful, but does not have medical care.

A monastery is all three.  So is a town, if you know where to look.

If your Stress + Wounds ever equal 10 or more, you cease to be a playable character.

If Wounds brought you here, you are merely dead.

If Stress brought you here, you go insane (or some equivalent).  You can be dragged back to civilization (while exhibiting the worst of your Breakdown + Derangement) and rehabilitated, gaining all of the benefits of Retirement, but you can never again be a playable character.

This is a buff that you gain when you are in town, and it is gained by having FUN.

Race your horses on the beach.  Cook a big feast for some NPCs.  Host a dance on the village green.

When a party is Cheered, the party gains 3 temporary HP.  These are shared HP.  The first person who would lose HP, instead removes poker chips from a bowl on the center of the table.

It's not hard to get Cheered, but you have to do something different every time (or at least party with different people). 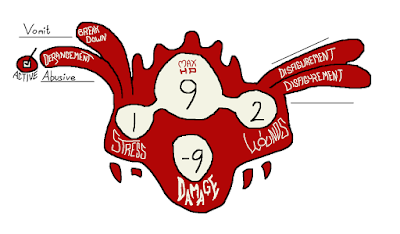 Look at the example above.

We have a character that currently has 9 damage.  They're in trouble, because they're effectively at 0 HP.  If they take any more damage, it'll go straight to Stress or Wounds.

Their Max HP is 9, but if the character recuperated in a monastery while the player used a sidekick for a session, their Max HP would be back up to 12.

They don't have any Disfigurements, but if they gain any Stress, they have a chance to vomit.  They're currently Abusive, and will remain so until their Stress is brought back down to 0.

Negative traits are fun, but they shouldn't be something that is picked at character creation.  (Balance issues, synergy/powergaming issues) but it works well if they are generated randomly the first time that they become relevant.  (DELAY ROLLS AS LONG AS POSSIBLE).

A person with acrophobia could walk along the top of a tall wall, they'd just be panicked the whole time. They wouldn't be able to attack an enemy or even shout a warning to their allies.

You'll also notice that Sadist and Morbid Curiosity both force characters into choosing a character class that they might not want.  I think this is wonderful.  Why should players always get to choose their next character class?  (ATTACK ALL PARTS OF THE CHARACTER SHEET.)

Disenchanted is a potentially disruptive Derangement, since it can force a player to retire a character that they don't want to.  To that I say "better than being dead".  I almost named this one as Sanity (because what sane person would go into a dungeon) or Family Man.
Posted by Arnold K at 12:32 AM

Email ThisBlogThis!Share to TwitterShare to FacebookShare to Pinterest
Labels: death and dismemberment, philosophy