The Tangled Cladistics of the "So-Called" Undead

There's a problem with the word "fish".  The word "bug" has the same problem.

In both cases, the word was coined and propagated by non-specialists, describing something without any need for precision.

A bug is any little creepy-crawly with more legs than a decent Christian should have.

A fish is anything that swims in the water and breathes water.  Even the beaver can be classified as a type of fish, with a bit of squinting.

(Don't resent past generations for their shitty systems of classification.  Their systems served different needs.)

Intentions notwithstanding, the end result was still overlapping systems of poorly-defined categories, which leads to labyrinths of conflation whenever anyone tries to have a technical conversation about them.

This is the exact problem that the Lesser Undead currently have.

The term "zombie" and "skeleton" do not apply to any specific thing.  They can refer to the same thing (because zombies must surely decay into skeletons at some point), which is an idea that Gus first impressed upon me.

And conversely, the word "skeleton" can refer to two very different things.

Let's start with negative energy.  There is not such thing, and any scholar still insisting on the existence of such a material deserves to be fed to ants.

The very idea of negative energy (as something that is simple, sterile, and easily harnessed) endangers any aspiring necromancer by hiding them from the true powers animated every shambling corpse.

The truth is that corpses are invested by spirits summoned from hell.

These may be demons, but more commonly they are just lost souls (and in hell, there is little distinction between the two).

Negotiating with the damned is usually a fairly straightforward affair.  They are usually eager to sell themselves into an interminable servitude in exchange for nothing--the chance to feel air on their skin again, for example.  A great many of them can be lured into a corpse merely by the suggestion that they may get to see a loved one.

The exact type of investiture determines the nature of the Undead.  They are usually not allowed to have any free will at all.  Lesser undead are usually created to be an extension of the necromancer's own will.

But the soul's jail is not without its cracks.  If your skeletons hate you (and they probably do), you may notice them staring at you.  They may stand too close to you when you sleep.  They may find ways to deface their bodies, grinding down their feet in order to slow their paces, or allowing their hands to be crushed in hinges.  This is why experienced necromancers are always instill self-care into their undead.

But of course, shivering slave-shades are not the only spirits that can be invested in a corpse.  Higher demonic spirits can also be housed by the shabby walls of flesh, and these more powerful spirits have waxed in wit and puissance.

Remember that every human possesses seven souls.  Four that pass into the afterlife, and three that remain with the corpse. (How else could the speak with dead spell work?  You merely speak with the meat, not the eternal.)

A demon that possesses a corpse can capture, torment, and control the three early souls.  Although the fleshly souls are not a person, they contain a bloodless recitation of all the body's early deeds, and this is what the demon can use to gain power over the living.

A demonic corpse may know all the names and histories of the corpse's former associates.  It may even know certain secrets (although many secrets are beyond his grasp.  The flesh remembers the smell of the lock, but not necessarily the combination.  If it remembers a number, it may not remember the meaning or the significance.)  Still, when these memories are combined with a demon skilled at impersonation, resultant creature can accomplish great things.

There are also people who argue that necromancy is a victimless crime, since the undead can till a farm and produce food.  These people are fools.

The three worldly souls suffer.  The damned souls suffer (though less, perhaps, than if they had remained in Hell).  And when the Undead slip the leash, as they invariably do eventually, they are incapable of anything except hatred, cruelty, and self-destruction. 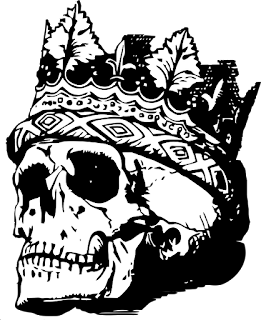 According to the Butcher's Heresy, Flesh preceded Soul.

In the earliest days, Flesh grew in the seas, and coated the rocks.  But it lacked breath, and it lacked mind.  They drifted without thinking.  They had watery spears and crude pumps, but they struggled to wield their own biology effectively.

And so these earliest tissues--plant, animal, insect--hatched schemes to give themselves some executive agency.  Their most successful plots involved the capture of the Soul from the Places Outside, where it would be scrubbed clean and invested into the Flesh.

Once laundered and installed, the Souls would believe that they were the body, and they would toil ceaselessly in the service of the Flesh.  They would fight for the Flesh, they would breed the Flesh, they would raise the Flesh's children as their own.  The Soul would forever be a slave the Flesh and its vicissitudes.  And it would be the ideal slave--one that always thought itself to be free.

Many allegiances were struck in those earliest days.  The Beastly Kingdom of Flesh was the first one to negotiate an alliance with the great spirits of Earth, who had begun to take notice of all the workings of the Flesh.

The Covenant in a Nutshell:

We, the Elders of Earth, will allow Calcium to swear obedience to the Beastly Kingdoms of Flesh.  Calcium will form an endoskeleton, so that the Beastly Kingdoms will have greater protection, stature, and strength.  In return, once the Flesh has failed, the Skeleton will be granted use of the Soul, in perpetuity.

The Skeleton People live far to the west, beyond the dying of the sun.  The land is dim and pale, and there is no wind.

They look like skeletons.  They walk.  They talk.  They carry backpacks.

They hate us, because we have forgotten the Covenant.  Only the whales still keep the covenant, and journey west to die.

They do not come here often, because the skeletons of whales do not swim as well as they used to, and the skeleton people are usually destroyed when they arrive.

But if left to their own devices, the Skeleton People will usually rescue their peers by killing humans and animals.  They know how to awaken the Skeleton inside (the Skeleton remembers the covenant, even if the Soul does not).  Then, they help the bloody skeleton out of the corpse.  Lastly, the newborn Skeleton rinses off the traitorous fluids and joins their brethren in a welcoming dance.

Awakening as a newborn Skeleton is a startling thing.  He is still Otho the Chemist, Husband to Marlia, but he is also a million grains of Calcium.  He has spent a millennia on the seafloor, fighting for better representation among the Salt Princes.  He is of Earth, and he is finally free of the machinations of that nauseating Flesh.  There is no question as to where his loyalties lie.

And so Otho the Skeleton is joyous to remember his true life.  His new friends are also joyful.  The least he could do is to go home, in order to share this same gift with his wife Marlia.

The Skeleton People are not much concerned with us.  We are oathbreakers.  They would punish us, if it were within their power.

But they are creatures of Earth, and the Skeleton King follows his Father above all else.  We are the least of their problems.

Once there was a God of Fungus.  He was called Shendormu.

He was assimilated by the Hesayan Church, as the Authority dictated that all lesser gods must be.

Except Shendormu wasn't completely assimilated.  A piece was left behind.  A death cult that eventually regrew into something entirely different, a sect that worshipped a particular aspect of their former religion.  They called themselves The Falcabrina.  They preached Oneness.

Or perhaps Falcabrina was another fungal spirit, sliding into a vacant chair.

Or perhaps Falcabrina was a cleric of the cult, who found a way to deify herself, and insinuate her godhood into her god.

Certainly anything is possible when hallucinogens are taken in these quantities.

Of Falcabrina, only this much is certain: there is a throne.  And upon the throne is the corpse from which grows the goddess.  And around the throne are the colonized faithful, each alloyed together into a singular will.

And so Falcabrina is a fungal hivemind zombie hoard (that is distinctly not-Undead), except it's not that simple.  The hive-mind connections are imperfect.  They are not instantaneous.  They leak.  They disagree.  And so Falcabrina has reproduced through violent fission.

What is cancer, except a cell that outgrows its parents?

Falcabrina has been limited by these disruptions.  When a contingent of her bodies begin to dissent, she must purge the cancer from her body.  But these civil wars can never be launched in secret, since their minds are still joined at the roots.  So while you might see fungal zombies dismembering each other with clumsy efficiency, for Falcabrina, the experience is more like a wolf chewing off a leg that has become infected.

Still, the purges have never been perfectly effective.  She attempts to rule the ruined city of Mosphorai as well as she can.  You can buy food from her farms, and she will certainly not attempt to infect you, but the city is plagued with a population that exceeds the grasp of a single mind.  And so disruptions are not uncommon, and are frequently fatal for travelers.  Because what better way to better fight your jailer than to recruit new bodies to your cause?

And it is also a city that must be navigated cautiously.  The process of fission is not a binary one, where a faction of bodies decides one day to rise against Falcabrina.  It is a gradual one, where every cell of her body secretly conspires against the whole, and must be suppressed by the rest of her body.

In fact, its entirely possible that nothing is left of the original Falcabrina.  Certainly the slouching heap that sits in the throne is just a figurehead.  Nothing makes that cluster of mushrooms any more significant than any other in her corpus.

Lastly, we musts mention that Falcabrina is constantly seeping into the world.  Pieces of her body (in the form of dozens of fungal zombies) sometimes develop autonomy faster than the rest of the body can react, and flee into the world.

Each of these pieces of Falcabrina is a complete organism.  They can grow (infest), adopt new philosophies, and are even capable of undergoing the same type of violent fission that Falcabrina herself did.

The most common form of these factions are animalistic, violent shamblers.  Nearly blind from their cranial growths, the mostly hunt by sound.  As a category, these creatures are called Legion.  Their bite is usually infectious.

But they are not the only of Falcabrina's children to depart.  Some of her rebellious organs are singular individuals.  Not a hoard, but a person with an agenda all of their own.  A person who happens to be piloting a human body.

Falcabrina and her brood are staunchly opposed by paladins of Shendormu.  These brave men and women strive to protect the innocent with all of the powers of the Sacred Shroom, the Holy Mold.

Paladins of Shendormu can cast illusion in the minds of those that they strike with their spear (no save).  Their Mount is the psilocybin mushroom.  When one of them dies, you can plant their head in compost and the character will regrow.  They will regrow smaller, though, and will return with -1d3 Str and -1 Int.
Posted by Arnold K at 2:45 AM