The Mother of Osk

This is going to be a difficult class to play.

It is difficult because you are a parasite, and you only infect other player's characters.

You will be powerful together, but eventually you will consume their body entirely, and they will die.  You will remain, but they will need to roll a new character.  You killed them.

In the yellow wastes of Abasinia, there is a plateau called Osk.  Atop the plateau is the is the city of the same name, the city of living rubies, where the black sugar is made and love is only known to slaves.  We will not speak of them.

Beneath the plateau are the caves of Osk.  And in the largest of the caverns is the Mother of Osk, who has grown too large to ever leave.  Her first birth was as a dragon, but her second birth was as an Oscadian, and indeed she is the only mature Oscadian in the world, for Oscadians do not reach sexual maturity unless their first birth is from the embers of a dragon's egg.

The Mother is a gentle creature, who has grown weary of war, and loves the quiet dusk beneath the plateau.  Even those who seek her out in order to kill her, or steal her many treasures, are usually not killed, if she can help it.  They are merely maimed, then nursed back to health.

She consorts with poets, philsophers, and priests.  She is a devout follower of Hesaya.  If you do her some great service, and if you are gentle with her rough children, she may reward you.

This reward may take the form of wisdom, treasure, or healing.  The poets are wise, the gold is lustrous, and her milk is thick with potency, but the greatest gift she can give is to infest you with one of her children, a rite normally only reserved for dragons.

Total psychic consent is required for this process to be successful.  NPCs are unreliable in this regard--only PCs can carry a parasitic Oscadian, and only PCs can play an Oscadian.  They are too powerful and subtle for anything less.

Oscadians are a full PC class.  Part of the fun of this parasite class is the fact that you essentially become two players inhabiting the same body.  This is unusual and intimate, and is hopefully a unique roleplaying experience, culminating with the death of the host.

But yeah, sure if you want to treat it as a living suit of armor that casts spells, sure, go ahead.  Be boring. 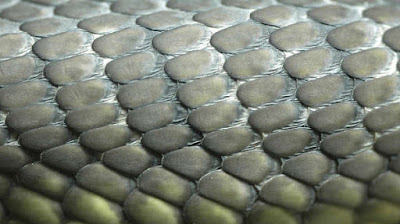 An individual Oscadian is actually a colony of clonal organisms, like a coral reef.  There are nineteen types of sub-Oscadians that will grow and differentiate inside the host's body, each one technically an independent animal that shares a bloodstream with its siblings.  These sub-Oscadians will eventually replace every organ in the body.

No one really really give a shit about that, though.  When someone sees an Oscadian, they see a human body overgrown with thick, homogenous, grey scales.  Each of these scales is a sub-Oscadian (one morphology out of the nineteen).  Each one has a single red eye that they open when they cast spells.

When the head is replaced, it is will a flat, heavy-browed face that is mostly occupied with a single red eye the size of a fist.  If the calcite eye is ever pried from the skull, it is a gemstone worth 200s.  It will not regrow.  There is only a narrow slit on the bottom of the head.  This is the polite mouth, and it is used only for speech.  It is incapable of eating.

Luckily, at this point the rude mouth has already grown out of the solar plexus, and is capable of assuming this responsibility with a formidable efficacy.

This process is gradual, though. You begin your life as only an arm.

You currently control an arm.  Your host loses control of that arm.  You can use your arm normally.  This potentially allows you to each make a melee attack against a target, or you can both coordinate your turns to fire a single arrow at your target.

Generate your HP normally.  You now share an HP pool with your host.  This makes you very hard to kill.  If either of you die, you both die.  You have separate minds, but a singular body.  If a spell or poison affects one of your bodies, it also affects the other one.

As a wizard, with one MD per level, up to a maximum of 3 MD.  An Oscadian begins knowing only two spells: speak with reptiles and speak with insects.  At Oscadian B they learn acidbolt.  At Oscadian C they learn dominate insect.  They can use scrolls but cannot replace the spells they know.

You require the use of your arm to cast these spells (as normal).  You don't require a mouth (which is good, because you don't have any).  You can produce the speech required for spellcasting by buzzing all of your sub-Oscadians simultaneously.

You grow to cover the entire body except for the face.  You count as a suit of plate, except you do not take up any inventory slots.  (You still sink automatically if you fall in water.)

Similar to how shields are sundered, you can choose to shatter some of your sub-Oscadians as a free reaction.  If you choose to do this, you may reduce the incoming damage by 1d8, and your AC decreases by 2 points.  You can do this twice, but not thrice (since that would kill too many of your sub-Oscadians).

It's also pretty traumatic, since you then have to watch your siblings (pieces of yourself) flex and squeak and bleed to death on the floor, like legless beetles.

Your dermal population will regrow in one week.

Your hand is not a normal human hand anymore.  It is a jagged talon the size of a shovel's head.  You can attack with it to deal 1d6 damage, but you cannot do any fine manipulations with it.

You can also perform a horrific haymaker with it.  You get +2 Attack and deal 2d6 damage, but if you miss or fail to kill your target, you lose your next standard action as you recover your poise.

You finally grow populous enough to consume your host's head.  You retain many features from your host, but the face is not one of them.  Your face is now dominated by a glassy, cyclopean eye.

You also consume the brain.  You gain access to all of your host's memories, and you retain one class ability from your host.  This is negotiated with your DM, but I recommend retaining their most iconic ability, such as a barbarian's rage or a wizard's spellbook.

You have one regular humanoid arm and one Ragged Claw.

You are now more than just an arm, you are the entire body.  Your host is now dead, and their player will have to roll a new character.

If an Oscadian were to read this blog post, they would have many objections to the terminology that I've used.

They do not see a parasite, nor do they see a host.  Instead, they see a first child and a second child, who eventually mature together into the Oscadian.

In their minds, an Oscadian is made up of many subunits, each of which is technically an individual animal with it's own heart, lungs, and (linked) mind.  A human, too, is theorized to be made up of tiny individual animals as well.  None of this is an obstacle to the concept of all these disparate parts seeing themselves as a unified whole.  An Oscadian's sense of self is no less fractured than a human's.

The way they see it, an Oscadian has four parents.  A human father and a human mother.  An Oscadian mother (Mother) and an Oscadian father (long dead, except for what remains in Mother's spermathecae).

An Oscadian who visits their human parents would be just as loving and understanding as the host human would have been, and will probably try to gently explain that changes that they have undergone.  They still love their parents.  They still love the Prophetessa (May She Live Again).  And they still love beer, even if they can't taste it anymore.
Posted by Arnold K at 9:22 PM