The Shendru are a species of omnivirous tree.  Their branches are subtly articulated, and they have a toothed maw atop their barrel-like body.  They have the ability to enslave other types of plants, and are sometimes served by brackles or treants.  Although they don't have nooses, they're sometimes known as hangman trees by very old pedants.

Brackles are a species of humanoid plants that are capable of spitting thorns.  They are narrow and sharp, all elbows and fluted snouts.  They travel the world looking to exchange pollen before dying in winter, as each brackle only lives a single year.

Marilanths are another species of humanoid plant.  They are large masses of flower-covered vines with four clumsy arms.  Like Brackles, they are itinerant, travelling the world while looking for places to set down their roots.  They sometimes sell drugs.

We now know that they are both members of the same species: the Shendru.

This is not common knowledge because brackles and marilanths don't speak of their sexual habits, a cultural taboo that is even stronger among Shendru than among humans.  (Shendru are not a monoculture, but this is true among the cultures of Mothmoria and Greenmarch, which are two populous "cities" of the Shendru.) 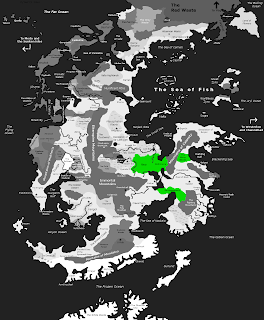 Brackles tend to wander.  Perhaps they just want to experience as much as they can in the brief year before they die.  Perhaps they're driven by a desire to pass their pollen on to as many marilanths as they can.  Perhaps they are driven to protect the groves and farmlands of their families by searching out threats.  Or most likely, all of the above.

They have faces like seahorses and don't eat very much.  They lose weight steadily over their year of life, and are usually quite gaunt by December, when most of them die.

Brackles write very good poetry.  In winter, many brackles choose to inscribe their death poems along the lengths of their limbs.

Marilanths can grow much larger than a human if food is plentiful.  In this case, they usually also grow a second pair of arms.  Marilanths also tend to wander, although perhaps not as far afield as brackles.  They tend to be more interested in gustatory experiences.

All Shendru can talk to plants, but marilanths are exceptionally persuasive.  This gives them a good deal of control over their farms.

Brackles who form strong bonds with marilanths will usually "marry" them.  This involves collecting ingredients for a feast, a night of dancing, and then a meal that includes the brackle.  There few cases where a brackle and a human have fallen in love have followed the same pattern.

When a marilanth is ready to settle down, or when she begins to starve, she sends down roots and becomes a tree.  Her children are the product of her own eggs as well as the pollen that she collected over her lifetime.  (She can continue receiving pollen as a tree, but in some cultures this is considered unseemly, as shendru exist in a dreamlike state most of the time, and not fully aware of everything that happens around them.)

Shendru trees can grow brackles and marilanths whenever they wish, but they can also grow fruits that imitate the substances that they have eaten over their whole lives.  A shendru who has tasted coffee can grow a caffeinated fruit that tastes similar.

Marilanths also possess this ability, albeit in a much smaller capacity.  This is why they often sell drugs, which is why they are often chased away from civilized lands.

The scholars will tell you that Shendru were created by the old spirits of the forest, in order that they might fight back against the incursions of mankind.  Treants were too slow to grow, too slow to anger.  Why else would brackles have such deadly thorns?

The Church will tell you that the Shendru were created to serve humanity, but when we accepted sins into our hearts, the forests turned against us.  Why else would they bear such pleasing fruit?

The Elves will tell you that the Shendru were bred to be farmers.  What better to tend to a farm than the farm itself?  It fits their model.

<sidebar>When people invent their own races, there are two things that annoy me.  First, presenting any intelligent species as a monoculture.  Second, not giving them any settlements of their own, or only giving them a single place of origin.</sidebar>

The Shendru of Mothmoria are waiting for their masters, the giants.  They have been entrusted with the gardens, and they have kept them immaculate for centuries.  They have done more than maintain, actually--they have expanded.  Every generation of caretakers have measured their success in the increase of Mothmoria.

It is a garden maze the size of a forest, filled with hedges, contemplation pools, mossy statues, iron gates, and softly bubbling fountains.  With all of the local plants charmed by the Shendru, weeds don't even poke up between the stones.

Mothmoria is beautiful, tranquil, and useless for anything except for quiet contemplation.  Somewhere in the middle of it, behind the endless terraces of waterfalls and lilies, are the stone houses of the giants.  They are quiet now, even the Shendru have only the vaguest idea of what is contained within.  They aren't allowed in the houses.

To the west is the Great Forest Yava, the eternal stronghold of the elves and the most beautiful place in the world.  They fight a slow war against the Shendru of Mothmoria.  Both sides are loathe to disrupt the peace of their forests, and so the war is fought at the pace at which trees grow.  Outsiders could be forgiven for thinking that this war is gentler or less bloody.

The Dukes of the Greenmarch

The Shendru of the Greenmarch are organized into plantations, each one a zone of land controlled by a Duke or Duchess.  Each one has a longhouse built around their progenitor.  The brackles and marilanths of that place are organized along familial lines, with the male brackles traded among houses as workers, soldiers, transporters, or arranged husbands.

Visitors are often struck by how human the society seems.  They even have their own currency: black brass coins.

And humans are welcome there.  The Greenmarch conducts a fair amount of trade, in crops, spices, cotton, and wool.  (Their power over plants simplifies many of these enterprises.)  They even maintain a silver mine.  Most of them are Hesayan, although doctrine dictates that they lack the seventh soul.

There are a few oddities: the bounty on bees (to prevent accidental pregnancies), the ritualistic skirmishes between brackles trying to earn fame, the drug tolerance contests, and/or the mutually cannibalistic friendship ceremonies (of which humans are expected to participate.

Humans are given new names when they arrive in the Greenmarch.  Human names are considered vulgar within their borders.  Human reproduction is also a mild taboo (since many of the younger brackles don't know about it), and it is polite to pass on the mythology that humans reproduce the same way that Shendru do.

Kasrosassus and the White Woods

Pale trees lean over streams lined with dolomite.  Their leaves are red.  White roots grip chalky hillsides, and the straw-yellow grasses are as thin as a newborn's hair.

The ecology of the White Woods is essentially vampiric.  From the smallest mouse to the thickest bear.  Even the deer suck their meals.  Mostly hairless, entirely albino, and with a universal aversion to sunlight, which pierces the thick fog only rarely.  On especially bright days, most of the animals retreat into the extensive karst caves that dot the forest, like antelope huddling near a watering hole during the dry season.

At the center of it all is Kasrosassus, a botanic titan whose red eyes can see the dead, and whose crocodile mouth vomits forth huge clouds of fog.  Inside his vast vegetable bulk nest families of bats.  Kasrosassus claims to be the progenitor of all vampires.

Kasrosassus is perhaps the most powerful necromancer in the world.  It is said that Shadoom plucked his seed from the darkness behind the sun and planted it in Centerra.  Even Queen Yama studied at the knee of the leviathan.

All creatures that die within the White Woods immediately rise as undead under the control of Kasrosassus.  They walk to the middle of the woods, where Kasrosassus plucks them up and sucks them dry.  The dessicated undead is then stored in the cool, dry caverns beneath his roots, where he stores the rest of his armies.

In bygone days, Kasrosassus marched on the cities of Brynth and Belgast.  His "sons" were white trees, conveyed in hundred-wheeled chariot-urns, pulled by an ever-growing army of undead.  Their powers extended for miles around each one.

The Church broke the Sons of Kasrosassus into splinters, and drove the hordes back into the pale arms of the White Woods.  They never uprooted the great necromancer from his stronghold, but he has not ventured from his stronghold in any of the days since.

Travelers who would pass the White Woods would be wise to seek safe passage.  Those who would do so are advised to bring a human corpse with them as they travel (or make their own).  As soon as they cross the threshold of the forest, the corpse will sit up and speak, and they may communicate with the great necromancer directly.

The usual fee is a single cow for every traveler.  Simply slit their throats and they will walk off themselves.
Posted by Arnold K at 8:04 PM