The city of Gafferdy had a huge necropolis.  Within its crypts, generations of dead were revered, respected, and consulted.  When Gafferdy was destroyed by the Siege Castle, the city's honored dead strove to protect it.

The dead roused too slowly to save the living.  However, the necropolis succeeded in driving off the invaders and building the Skeleton Fence.  The powerful undead raised new ranks from the fallen and then fortified the city against further invasion.  They walled themselves off from the outside world, creating a city where the dead were the only citizens.

Now, the innermost parts of the ruined city are walled off, with the bone-white walls of the Skeleton Castle clearly visible from afar.

The Breadcrumbs of the Skeleton Castle are:
- Near the Cemetery Fence, there are several things (graffiti, undead parrot) that mention how Modest Madroff the Smuggler can smuggle you into the Skeleton Castle.
- It's easy to track down Modest Madroff.  He died five years ago, and was buried in the cemetery back at the City of the Moon.
- You'll probably need to beat up the Cemetery Kids to get access to the cemetery in the City of the Moon.  They have a large bell that they stole from Madroff's grave.
- The grave is a small dungeon.  If you bring any light source into it, zombies will attack you.  If you make a wrong turn, zombies will attack you.  If you ring Madroff's bell, you'll hear Madroff ringing his corresponding bell to guide you through the dungeon.  (Any bell will work, not just the bell you recovered from the Cemetery Kids.)  Inscriptions at the beginning of the grave will inform you to (a) bring no light, and (b) ring a bell.
- Meet up with the now-undead Modest Madroff, now captaining his sunken ship, the Modest Maiden through the rivers of the underworld.  Pay him the fee (1000g or his other bell) and he'll transport you.  It'll be exciting and spooky and eventually you'll arrive at the Skeleton Castle.

Alternatively, just find someone who will turn you into undead.  Then you can cross the Skeleton Fence without dying.

Alternatively, just find a way to get invited into the Skeleton Castle.  There's a skeleton princess somewhere that is looking for a suitor.  Do I hear wedding bells?

The Skeleton Castle is a massively overbuilt mausoleum, fortified against armies.  Lots of intelligent skeletons, honorable skeletaur knights, necrophidiuses, etc.  They'll probably assume that the characters are simply unrotted ghouls, since there are never any living creatures in the Skeleton Castle.  "Hey new guy!" they shout.  "Come eat some of this dead fisherman that someone threw over the fence!  He's nice and bloaty!"

If the dungeon has a gimmick its going to be converting half the party to undead to solve certain puzzles, but honestly undead dungeons are so much fun they don't really need a gimmick.

The Skeleton King is basically a meta-lich, formed by all the heads of former ruling families fused into one big skeletal lump.  He probably looks like Gravelord Nito.  Powerful spellcaster, but prone to bickering and infighting.  Obsessed with spies.  Terrified of the Siege Castle.

The Local Allies are probably some hilariously somber pilgrims, struggling to pay a visit to their departed loved ones.  A little old lady, a tearful lumberjack, etc, all straight from a funeral.  Expect quests that involve treating the undead respectfully.

Also expect some horrific shit, because the undead are good at being both Halloween-spooky and inhumanly cruel.

I've decided not to write up the castles in order.  Partially because it's a loose order (the player's can mostly do them in any order they want, with the following exception).

So the Moon King is basically withdrawn from his day-to-day ruling.  It's up to his lieutenants to run his evil kingdom.

One of his lieutenants is the Puppetmaster, who takes notice of the party and conspires to eliminate them.  His plan is to invite all enemies of the castle to a party where they will all be killed.  This nefarious plot unfolds as castles are cleared.

The party cannot access the Counterfeit Castle until at least four castles have been defeated and four of the swords reclaimed.

There aren't really any Breadcrumbs or Obstacles for the Counterfeit Castle.  It just shows up.

One very important thing about the Counterfeit Castle: it's a shoddy imitation of the actual Moon Castle.  The map is almost identical, which will greatly assist clever players.  For example, a obvious treasure in the Counterfeit Castle might correspond to a well-hidden treasure in the same place within the Moon Castle.  You'd never find it unless you knew which part of the wall to smash.

The evil city announces plans for the Festival of Dreams.  Fireworks, candy, a dance contest, etc.  Most notably: the doors of the Moon Castle will be opened on that night, and everyone will be allowed to enter and petition the Moon King.

The Puppetmaster hopes that this will draw out enemies of the Moon King, and he hopes to assassinate them all in one fell swoop.

The Festival preparations begin.  Lots of construction.  Wood, sawdust, plaster.  Huge armies of cotters are brought up from dusty basements.

The Festival preparations are in full swing.  Lots of errands (quests) that need to be performed.  Lots of happy people, for once.  Optimism.  The party is encouraged to build a float, to be entered into the parade.  The prize is a mask.

The real Moon Castle is removed to the Shuddering Mountain, far away.  This happens in the dead of the night.

A fake Moon Castle is built in its place, and a brilliant rainbow bridge constructed over the chasm.  Banners are hung.  This is what the cotters have been building these last few weeks, but it looks cheap and hasty (because it is).  This is the Counterfeit Castle.

If the party decides to enter the Counterfeit Castle, they will be surprised at how shitty the castle looks from up close (gaping plaster, sagging woodwork).  Once inside, they will be subject to a brutal assassination attempt.  Probably puppet ninjas, portcullis traps, and cloudkill.

If the party burns it down, it will be rebuilt by the next day.

If the party continues to avoid the Counterfeit Castle, eventually it becomes an open secret with the Puppetmaster sending murder puppets after them, screaming "COME TO MY BIRTHDAY PARTY WE MADE A CAKE FOR YOU!" in increasingly deadly + deranged combinations.

The Miniboss is the Counterfeit Dragon, of course.

The Boss is the Youthful Moon King, a knight.  He is actually a puppet controlled by. . .

The Real Boss is the Counterfeit King, a wizened wizard atop the throne.  He is actually a puppet controlled by. . .

The Actual Boss is the Puppetmaster, hiding the rafters.  He is actually a puppet controlled by. . .

The For-Real Actual Boss is the Real Puppetmaster, hiding in a flying theater above the castle, poorly disguised as a cloud.

Your Local Allies are the unfortunate cotters.  Most of them just lie down in the gutters and watch the clouds pass overhead, but a few still have ambition and drive.  Expect some proletariat quests, as well as some heartbreaking ones "please take care of my family--they think that I am dead". 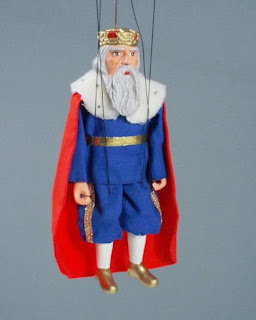