There's No Such Thing As Foxes

There's no such thing as foxes.

They're mythical beasts, existing only in heraldry, rumor, and fraud.  (There are many ways to dye a coyote.)

They are believed to bring good luck, confidence, glibness, and then ill fortune (in that order).  Potions made from fox's tongues are said to exist, but there is no agreement as to what (if anything) they actually do.

Common wisdom maintains that foxes have never existed.  They are simply something that stepped out of myth, an inversion of a wolf.  Where their progenitors are large and direct, the brightly colored foxes are small and clever.

Even their coloration is inverted: where a wolf is a drab brown or grey, foxes are depicted in brilliant oranges, red, and sometimes with exotic patterns (such as paisley).

And while most believe foxes have never existed, there are a few who believe that they were once real animals that succeeded in making themselves imaginary.

According to them, foxes exist all around us, stealing our food and warming themselves in our beds.  Their magic makes them impossible to notice, remember, or record.  All trains of causality that might lead to their discovery are brushed away with a whisk of a fox's tail. 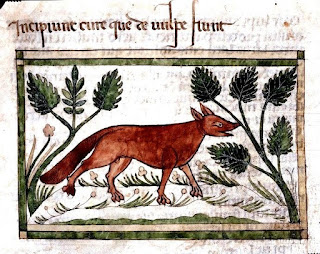 They say that the foxes once enacted some powerful magic to make themselves disappear from all observation, memory, and thought.  At the center of this powerful magic was a stone called the Foxenstone, an monolith that towered over the trees, its surface was covered with spirals of foxes running towards its apex.

It was made from gold, or amber, or perhaps a reddish salt that was poisonous to cats.

And while many things about the Foxenstone are debated, its location is not: it is located in the Foxenfort, above the Foxenport, in Foxentown, on the western wendings of the Bearded Ocean, not too far from Trystero, where men have learned to become giants.

There is only one catch.

A visitor touring the Foxenfort will be entirely unable to catch sight of the Foxenstone, which by most accounts is forty feet tall and standing in the center of the fort's courtyard.  The locals will wink and tell you that it's there all right, it's just very well hidden.  Do you see any foxes?  Of course not.  If you saw either, then the foxes would not have done a very good job, would they?

In Foxenport, you can buy a fragment of the Foxenstone to take home.  To the untrained eye, these appear to be empty sacks.

The 6119 foxes carved on the side of the Foxenstone are well-described, and ownership of the foxes is a well-regulated business.  They are even traded among the nobles as a form of currency.  Since the transactions are all immaculately recorded by the Foxentown Bank, there is never any discrepancy.  You can buy a fox near the bottom for as little as 500g, while the foxes near the top command much higher prices.

Carved foxes on the sides of an imaginary stone are not an accepted currency anywhere else in the world, but in Foxentown, they are as good as gold.  Better, actually, since it shows a certain willingness to engage with the imaginary economy.

Lastly, those who doubt the existence of the Foxenstone would be wise to direct their attention to a single, extremely convincing fact: Foxentown is impossible to locate except by those who have already been there.

Bear in mind, that Foxentown is a bustling port filled with merchants speaking a half-dozen different languages, and exchanging the flotsam from a hundred different cities.  Because of this, it is not hard to get to Foxentown.  You have only to venture into any seedy harborside flophouse and ask if anyone is interesting in "chasing the little foxes" and some congested whaler will speak up.  He's been a dozen times; he loves the way the morning sun reflects off the beautiful Foxenstone.

He'll guide you there for a pittance (if he doesn't die from fever first), and you will invariably be disappointed.  Despite the legends, Foxentown appears to be just another warm-water shantytown, filled with robbers, whores, and mosquitoes.

Tales exist of other Foxentowns, and other Foxenstones, that no one can find because no one has ever returned.  Perhaps you'd have better luck asking a real fox.

That was a joke.  Foxes don't exist.

The God of No Foxes

It is said that the cost of making a real thing unreal was to make an unreal thing real.  This unreal-thing-that-became-real is the God of No Foxes.

Other names: the False God, the No God At All, Nobody.

His followers are clowns, fools, babarukhs (the mischief people), and especially madmen, who are said to be the only ones capable of understanding the False God at all.  He fav

He is a god without any (apparent) agenda except to sit and watch things fall apart.  He delights in deception, without any concern for the consequences.  His followers have sometimes been credited with good deeds, but they are much better known for their nefarious ones.  Deeds of deception, disruption, and despoilment.

If there is any virtue that is held in high regard, it is unpredictability.  His followers are fond of saying that the greatest chess player might be the greatest chess player, but if she always plays the same way, she will lose to someone who has studied him.  Therefore, a degree of sub-optimum play is optimum.  Therefore, a dash of foolishness is required to become a genius.

Quite a few of them end up in finance, being already comfortable handling imaginary values.

They worship in the open, by adopting a series of codewords, such as "Lovely day, isn't it?" and "Yes, quite." which might mean "Hail the False God, who is the True God!" or perhaps "May he reign forever in today!" or perhaps "May the wheat grow straight and the babies moulder in their cribs."

This is why you must be very careful whenever a stranger turns to you and says "Lovely day, isn't it?"  You may be praising the God of No Foxes by mistake (and this is why clerics are often so impolite).

It is said that most of the False God's worshippers do not know they worship him, which they do through confusion, making mistakes, and wasting time (such as reading a blog post when they have more important things to do).

These are the claims that his followers make, at least.  They may or may not be true (whatever that means).

The False God dwells in Mautertium, the No Castle, which is a cave, which in all likelyhood doesn't even exist at all.

At its heart are the Parade Grounds, where frolic the revelers--men and women covered in masks and paint and little else.

One must be careful in the No Castle, because sometimes the body is the lie, while the mask is the truth.

It is said that Nobody one captured a great number of powerful beasts: trolls, manticores, medusa, and even a purple worm and a dragon.  These monsters were turned into humans, and given masks that depicted their original disposition.  They were then allowed to roam Mautertium to their heart's content as celebrants of the False God.  [DM's note: appearance as naked human wearing a mask, stats as troll/manticore/meduse/purple worm/dragon, including modes of movement.  Other celebrants wear identical masks.]

You'll also see a lot of stuff like this:


Nowhere in Mautertium will you ever find a fox.  However, you will find a great many people in fox masks.  (Perhaps this is where the fox's went?)

You may hear the celebrants repeat the Prayer of the False God:


Nobody loves me.
Nobody cares.
And when I'm all alone,
Nobody is there.

But they don't repeat it very often.  That would be predictable, wouldn't it?

The False God appears as four men inside a monstrous costume (a bit like a Chinese Street Dragon).  You can see leg hairs sticking out of the tights.  You can smell beer on the costume.  You can hear four men inside the thing whispering to each other.  They are talking about you and they are laughing.

The corner of the costume lifts up a little and you think you can see a hand wiping wine away from the corner of a mouth.  They are talking about you and they are laughing, because who would ever imagine you?
Posted by Arnold K at 3:06 PM