Creatures born in Centerra inherit the acquired traits of their parents.  Muscular parents birth muscular babies.  A daughter is born with a scar that matches her fathers.  A blind mother will birth a child with terrible eyesight.

So, your parents affect your genetics, but not as much as where you were born.  Or more specifically, where your mother spent her time when she was pregnant.

This is how it works for most of the races of Centerra.  For example, if your mother spent most of her pregnancy aboard a ship, you'd probably be born as a marinel.

The Land of Flowers is sterile.  Nothing is born there.

Creatures born in the Valley of the Maggot grow up large, hungry, and violent.

Those born in the Red Thickets of Diosassus are hairless and vampiric.  (They are not true vampires, however; they just have a curious dietary restriction.)  In fact, that entire ecosystem is vampiric.  Hairless deer suck the sap from the pale trees in the crimson shade.  They are preyed upon by hairless, albino wolves.  And so on, and so on, all the way up to the creeping monstrosity that is Diosassus himself.

Everything on the Little Island is diminuitive.  Lilliputian.

And then there is the case of Casvetania's Castle. 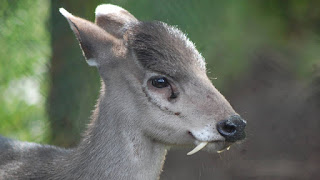 There are many stories of tragic wizards.  (Their stories are often retold, since their mistakes so often spill from their domain into our own.)  But the stories are usually of insult, grave redress, the folly of immortality, abominable invention, and that sort of thing.  Wizard shit.

But this story begins with a pair of married wizards who lost a daughter to disease.  Her name was Casvetania.

Their grief was raw, powerful, and sincere.  Their sorrow became their ambition, and when it was hitched to the wheels of their sorcery it dredged up some deep sorcery that has not been seen before, or since.

The Church sealed off the castle.  If you want to know what is inside, you'll have to consult their secret archives in Coramont, or else travel there yourself, pry the white lead out from between the bricks, and take a peek for yourself.

But the village below the castle is called Buckins Harbor, and it is still inhabited.

The magic of Casvetania's Castle seeps in the land around it.  On quiet nights, you can feel it in your heartbeat.  And everything that is born in the shadow of that castle is Casvetania.

Above a certain size, of course.  Anything that is larger than a dog and is pregnant near the castle for the majority of its pregnancy will birth a Casvetania.

She's a small girl, even when grown.  Wispy hair.  Wide-spaced eyes.  Button nose, but a bit too much gum when she smiles.  The majority of Casvetanias suffer from dementia when they get older.  Sometimes as early as 45.

Small pregnant creatures instead give birth to small masses of undifferentiated tissue.  Pink skin, pale hair, and perhap a couple of teeth.

And of course, the fish and the sharks birth Casvetanias too.  Not a week goes by without a newborn Casvetania washing ashore, all blue and fish-nibbled.

The woods are full of wild Casvetanias.  Raised by families of immigrant wolves, perhaps.  You'll see them in the trees, faces painted with lichen milk.  Most commonly, their are found by their older sisters and then raised in the family tradition.

Buckins Harbor is full of them, as you'd expect.  You'll probably meet one before you arrive.  A lot of the ships that sail into and out of Buckins will have a Casvetania on their register.  They won't call themselves "Casvetania" of course.  They'll be Salla, or Mara, or Casana,  But they will be a Casvetania.

You see them at all ages.  Grey-haired Casvetania's haggling in the marketplace with pair of teenage Casvetanias.  A pair of Casvetanias arguing in a tavern, one flush and ruddy, the other hollow-cheeked, like an abused twin.  Upstairs, a pair of Casvetanias are fucking in front of the fireplace.  Back in the alley, one Casvetania has just slit the throat of a much wealthier Casvetania (no tear slides down her cheek, but she is still careful not to look in the face of the woman she has just murdered.)

They don't leave Buckins very often.  They say that the rest of the world looks alien, and that nothing gives them a greater feeling of belonging than looking around a street and seeing your own face.

Many of them feel sorry for us, since we will never know that feeling.

Most people in Buckins Harbor are not Casvetanias.  They make up about 40% of the population.

Once there was a murderer who only killed Casvetanias.  The bodies were always found badly defaced (literally) and shoved into cribs.  When the killer was discovered, she was found to be a Casvetania herself, of course.

Some Casvetanias try to individuate themselves.  Obesity is a common method.  So is fashion.

Some Casvetanias have formed a cult.  They carve their own face into every available surface.  They control at least one neighborhood in Buckins, where only Casvetanias are allowed.  Each one takes another Casvetania for a wife.  They dress identically.  Alone among Casvetanias, they each go by the name of Casvetania, and differentiate themselves by secret hand signs, known only among themselves.  They are said to be ruled by the spirit of the original Casvetania, the unhappy soul of a child trapped in a chandelier.

Some other Casvetanias have banded together and investigated the sealed castle, in defiance of the Church's wishes.  (Buckins Harbor has a tiny church, but the two paladins quartered there also lead the town guard.)

They returned once, to sell off some loot they had found inside.  The said that the inside of the castle was covered in monuments to the dead daughter, the first Casvetania.  They also found evidence of earlier methods that the couple used to conceive a child.  They sold a map to an oil merchant, but the priest confiscated it.  Then they purchased every mirror in town (giving no explanation) and returned to the castle.

The paladins waited outside to arrest them.  But after three days, they still hadn't emerged from the castle, and so the entrance was bricked back up again.

Using This at your Table

Let your players be Casvetanias.  (Actually, I'd love to see how players differentiate their Casvetanias from each other.)

Hunt down the Casvetania killer.

Infiltrate the Cult of Casvetania.

Delve the Sealed Castle of Casvetania.