This is their second time through.

A million years of dynasty, brought to a halt when their empires ran into the temporal kingdoms of the elves at the end of recorded time.  Older than the universe that cages them.

Refugees into their own history, then, a fragmented retreat that left them crippled and ignorant.  A crash landing into pre-history: spaceships cracking their spines on the teeth of mountains, burning cycads, and a decade of dust that blinded the sun.

All of their treasures (constellations of mirrors, weaponized languages, omniscient birds, artificial suns, liquid syringe-worlds) were scattered when they hit the ground (like Judas when they cut him down).

They've tried evolving, and they've tried dying, but their genes will not allow them to do either.

All of this knowledge has been passed on for millenia, scratched out in the dirt in the shadow of their mother's belly.  They know this, and they know that information cannot survive that long.  They know how inaccurate oral traditions are across long periods of time.  But it is their history, and it's the only one that they have. 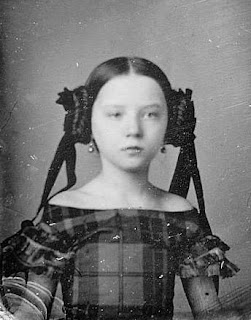 Adulthood is bestial, and so they avoid it.

Their maturation is marked with an immense decrease in intelligence.  It is death, as far as they are concerned.  To devolve into a beast is to die--it is the cessation of Self.  As soon as one of them grows old enough to forget their name they are cast outdoors, where they live like beasts.  Beds are only fit for those who know enough to name them.

Sexual maturation is the ultimate abomination.  Copulation is disgusting, a vector for disease and pregnancy (which are not so different in their mind).

The Brutishness of Adulthood

And yet, the adults are not mindless; they are single-minded.  Memories of childhood have been subsumed in martial contemplation.  There is no need to know the names of things when you know how to destroy them.  And above all is an overriding urge to protect their children and keep them save.

They respond to cuteness--they obey it the same way they obey gravity.  The instinct was instilled in them with all the force and subtlety of a warhammer.  Ducklings are cared for.  Bulls are torn apart with their bare hands.  They keep cats.

It is not clear whether they understand that they are actually ruled by their children, or if they know and simply don't care.

They sometimes fall into the blood-sickness, as their bloods struggle to re-assert themselves.  Along one pathway, their genes code for hypercerebral elites.  Along another pathway, their genes code for hypertrophic super-soldiers.  And without any epigenetic modulators to reign over this melee, the tide swings back and forth, but finally turns irrevocably at puberty.

They haven't forgotten much.  A full-size brain still sits behind the grossly thickened plates of their skull.  (Their skulls are the strongest part of their body.  An elephant could stand on their head and it would not crack.)

By the time they are banished into the kennels, they have long since stopped caring about their bed.

The Cruelty of Children

Pre-adolescence is a difficult time.  Each one is a genius, by our standards, but they have only a decade to learn and to act.  (The adults do nothing but fight, fuck, and pet their cats.)

At the age of one, they are speaking and arguing.  At this point, they can be taught calculus, but not grammar.

At the age of two, they have friendships and ambitions.  They've divided into cliques.  They shun the fashions of their older peers.

At the age of three, they are wrapping up their education.  They are better at chess than you are.  They attend art shows.  They sleep with stuffed animals: hippos, cats, sheep, parents.

They rule most of Yog, the city at the center of the Madlands.  (All of the races of the Madlands practice slavery, and they all have different reasons for doing so.)

You may even spy a few as far away as Charcorra, the gateway to the Madlands.

Sometimes, everything I've said so far is enough to explain their society.  Brutish, idle adults and a desperate ruling class of children slipping to the grave of puberty.  They tend to wage war on their neighbors.

A second type of Ungreya society is this: the children have found a way to retard and manipulate their adolescence.  They never grow up.  It's a sort of twisted neoteny, where they are sexually and intellectually mature and yet continue to look like children.  (Rejoice, ye pedophiles.)  This type of Ungreyan society relies on poisons and insects, both of which hold positions of immense practical and symbolic importance in their societies.

They usually refuse all attempts at diplomacy, except those conducted by children. Likewise, visiting adults of other species are not allowed to wander around freely unless escorted by a child.

And there is even a third type of Ungreyan society: the aristocratic fetuses. 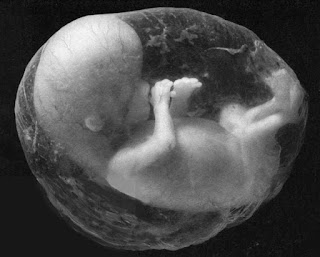 The Tyranny of the Unborn

As soon as a society decides that maturation is abominable, there can be only one logical conclusion.  Their utopia has a form, even if they haven't achieved it yet.

They call themselves the fetati, they for whom birth signals the end of their lives.  It doesn't matter how they achieved it.  They have found immortality by delaying their own births.

And so they live inside their mothers.  And when their mother ages and grows frail, they move into another.  (I'll leave the details to your imagination, except to say that the process is simple, direct, and messy.)

They see through their mother's eyes and speak through her mouth.  They experience life through her skin, a billion trembling nerves pressed against the surface of their placentas.

To be born is to die.  For those who are full citizens, birth happens only through accident or punishment.  Once they are born, it is the end of their life.  A funeral is held for the deceased.  The protestations of the newborn are ignored.  They are now a beast, a practitioner of slovenly biology: mastication, digestion, defecation, riddled with disease and suddenly mortal, an exile from amniotic Olympus.

They are all vegetarians, even the adults.

Adaptive -- After an Ungreya Adult attacks or is attacked, it gets +1 to attack, AC, and damage.  This bonus stacks up to +5 and lasts for 10 minutes. 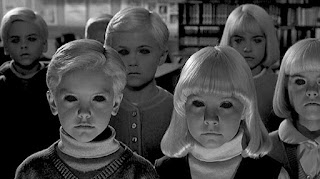 Scream -- Once every hour, an Ungreyan Child can scream.  Everyone who hears it sees a tiny black speck appear in their vision.  These specks last until the next day.  The next time they take damage, they take +1 damage for every speck in their vision, and the specks disappear.  Ungreya and their servants are immune to this effect (through years of exposure).  Outdoors, the screams carry for a mile.  Indoors, the screams carry through the entire floor of the dungeon.

One danger of exploring an Ungreyan dungeon: once they know you're there, they'll begin screaming every hour.  After the players have a few specks in their eyes, every combat becomes a lot more threatening. 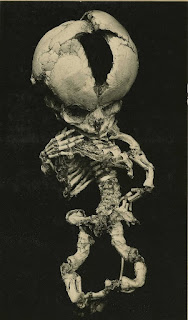 Fetal Domination -- A fetato (singular form of fetati) can see through the eyes of it's pregnant/pseudopregnant mother.  The mother automatically fails her saves against the fetato's spells.

Suffocation -- A fetato dies after 1d6+4 minutes outside of a womb.  (And remember that they travel with their placenta.  Otherwise none of this makes any sense.)

At-Will Spells: dominate person (only one domination at a time), telekinesis (duration = concentration).

Spellcasting as a wizard of whatever level you want.  Example spells: scry, invisibility, wave of mutilation (basically cone of cold that does slashing damage), wither (target loses half current HP, save for half), cure light wounds.

Note: Their psuedopregnancies aren't limited by species.  To answer your next question, a hippo can hold about eight; a horse about four (although they prefer to have more room to stretch). 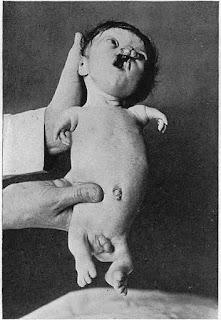