This page is for my players over in the Willows.  You know who you are.

I'm writing this because people looked a bit confused at times during last weeks game.  This page is intended as a reference, so that you can look at it and be like "Oh, so that's how those rolls work."  I actually have all the rules typed up on my computer but it's all unedited so fuck that.  If anyone asks you what version of D&D you're playing, tell them that it's "B/X D&D with lots of house rules".

I know it seems complicated, but it's actually very simple after you've played for half a decade. *wink*

Also, I'm pretty busy DMing during the game, so if you have a question like "how do I attack something?" consider asking the person beside you.  You can also ask me, because I love talking about DnD and explaining shit, it's just that the table gets hectic.  (Sorry.)

Most rolls in the game are the "roll-under" kind.  You roll a d20 (a twenty-sided die) and compare the result to a number on your character sheet.  If the roll is equal-to-or-less-than the number on the sheet, the roll succeeds.  LOW rolls are good.

Pretty much everything works like this (ability tests, saves, skills).

Attack rolls are more complicated because you're trying to hit someone else with a weapon, and who knows what kind of armor or dodgy bullshit they have?

An attack roll is a d20 + your attack bonus, which will be written down on your sheet somewhere (usually a +1 or a +2, or maybe a +3 for a viking).  If the result is equal-to-or-greater than than the target's Armor Class, the attack hits. 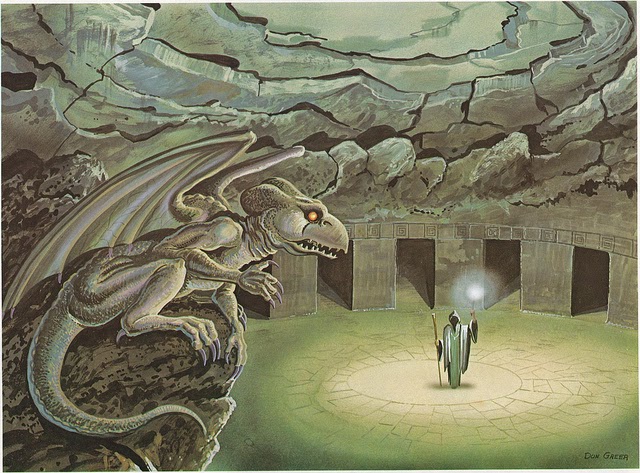 If you reach level 2, these will improve to +2 and +1 respectively.  After rolling to see if you hit (d20 + Attack Bonus), you then roll to see how much damage you do.  The damage roll is based on your weapon.


And ALWAYS REMEMBER that you are not limited to your character sheet.  You can do more than just say "I attack the goblin".  You can attempt anything in-game that you could feasibly do in real-life, and with similar chances of success.  Think about your options, think about your environment.

It's good to have a high Armor Class (AC), because then enemies cannot hit you as easy.  Enemies that have a high AC are harder to hit.

Unlike attack rolls, which involve rolling a d20, your Armor Class is passive.  Here is how you calculate it.
Your Armor Bonus Depends on your Armor.