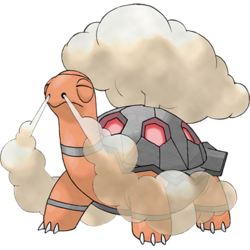 Tortoise tsars live in the snow (though you'll find them in dungeons, too).  You will find them in the Balkans, where they are still numerous and aggressive enough to hunt man.

They dig tunnels from riverbanks.  Their shovel jaws scoop clay, break stones.  They shovel under Slovenian soil, looking for coal that will keep them warm throughout the winter.  They break into coal mines and trample miners in their quest for coal, which they shovel into their furnace guts.  Then they stagger out, fire-drunk, while gunshots ring off their hides.

They are driven to tsardom the way dragons are driven to hordes.  It is in their bones and in their blood.  Their tsardom can be anything from a few rooms in a dungeon to 3000 acres west of the river.  The stats presented below are for dungeon tortoises.

How many peasants do they have (d20)?


What's interesting about this tortoise (d6)?
What does it want from the party (d4)?
Suggested by +Daniel Dean
Posted by Arnold K at 11:43 PM