Everything on this page (except for the gribbly) is meant to be accessory monster.  They aren't going to be the biggest monster in the fight; they'll be flitting around in the outskirts of combat. 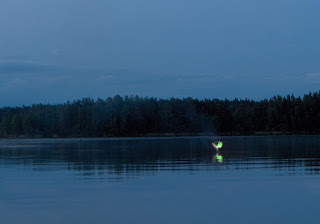 I know I've written about wisps before, but this one is better.

Keep them away from fresh corpses.

Luminous -- Appears as a ball of light.  Illuminates as a torch, unless it wants to turn invisible.

Animate Corpse -- Can enter a Dying person or freshly killed corpse and animate it, creating a lantern ghoul.  When the lantern ghoul is destroyed, the wisp will exit the corpse.  The lantern ghoul will be hostile or neutral based on the table below.

Follow Me -- Roll on this table instead of making a reaction roll.

Wisps cannot speak.  Even the neutral ones hate you for being alive, just a little.

Headlights -- Eyes shed light as a bullseye lantern (60' cone).  If it is looking directly at you, the glare gives you -4 Attack against the ghoul.

Neutral ghouls will give advice and accompany you as long as you are able to provide them with fresh corpses.  Hostile ghouls will try to kidnap someone, or at least kill someone.  It will use these fresh corpses to provide bodies for their fellow wisps.

Whether or not they're trying to lead you somewhere, wisps will probably hang around for a while.  And as soon as they find a fresh corpse to inhabit, they'll dive into it.  If this happens during combat, it could quickly make things difficult for the party.  However it goes, I hope it'll be a memorable lesson.

The fact that a wisp can enter (and kill) a Dying PC can be a shitty experience, if the player was expected to survive an otherwise fatal blow.

Wisps are incorporeal, and are capable of turning invisible.  Parties may not have the tools to kill one easily.  However, you can always run away from a wisp--they fly slow.  And a wisp inhabiting a lantern ghoul can also be locked in a sarcophagus or something.

Don't forget that wisps can be encountered as lantern ghouls, with the wisp itself only becoming visible later.

Looks like a flying eyeball.  If it vibrates its pupil while looking at something, a puncture wound will appear.  Each one serves a terophidian, who sees whatever it sees.

Spell Eater -- Whenever a spell is cast within 50', the eyebat captures the spell and becomes an optical hound, forever capable of casting the spell that created it.

Gaze Attack -- Anyone who meets the gaze of an optical hound must save or howl.  (An optical hound has no proper mouth, so this is how it must summon its packmates.)

Spellcasting (2 MD) -- An optical hound can cast whatever spell birthed it.

Flying, ranged attackers are a rare niche in D&D, but an important one.  They either need to be shot by an archer, or lured into a hallway with a low ceiling.  Neither one is difficult, but it may still force the party out of their usual tactics.

An optical hound is a fairly beefy opponent.  If it picks up a good spell, it can be fearsome.

An eyebat also prevents the wizard from unloading their best spells on the first round of combat.

A small black hairball with beady red eyes.  It's got arms and legs hidden in there, along with one hell of a mouth.  They are only capable of one type of behavior: running around and biting things.  They're smart enough to open doors and break windows, but that's about it.

Photophobia -- Save vs fear if they encounter a bonfire.  They will automatically flee from larger fires and bright lights.  They need to succeed on a Morale check in order to attack a group carrying a torch, and will preferentially attack non-torchbearers.  They can get bonuses on these Morale checks if they outnumber the party.

A gribbly can turn a human corpse into 16 gribblies in about 4 rounds.  Every 10 lbs of flesh can only yield 1 gribbly, even though the gribbly only takes a partial bite.

Stats as a HD 2 gribbly, except that it has two MD and can cast darkness.  Formed when a king is eaten.

Can be used to inject a little bit of chaos into a battle.  Gribblies are inherently destabilizing--either the party kills them quickly, or the party gets unlucky and finds themselves vastly outnumbered.  Once the players know what gribblies are capable of, gribblies become a threat even in small numbers, since they cannot be ignored.

Encounter design tip: give players a good reason to ignore the gribblies.  This creates an interesting choice, beyond "the gribblies are obviously the biggest threat, let's kill them first".

And if the gribblies get too numerous, the photophobia weakness gives clever parties a way to escape.

And you can also create destabilizing situations with gribblies.  What happens when a gribbly runs past the party, into the room where the pigs were tied up?

The gribbly king is essentially a Fuck You to parties that have been fighting gribblies for a while, and have developed an effective strategy for killing the poor things.  The darkness spell can quickly topple that strategy, and force them to come up with something new.

Eater of Woe -- Whenever an enemy rolls a fumble, the Imp grows.  It gains 1 HD, 1 MD, increases its damage die, and heals for 1d6 HP.  It also loses the ability to fly and gains the firebolt spell.  These changes last until the imp rolls a fumble.

The Bedevil ability is interesting (no save) but has a good chance of never becoming relevant, if no fumbles are ever rolled.  The Eater of Woe ability has the same problem.

However, increasing the number of imps in a fight can exponentially make them more dangerous, since their abilities synergize with each other.  Imagine 20 imps all casting bedevil on the first round of combat.

Like the gribbly, imps are inherently chaotic, and randomness is its own special type of threat.